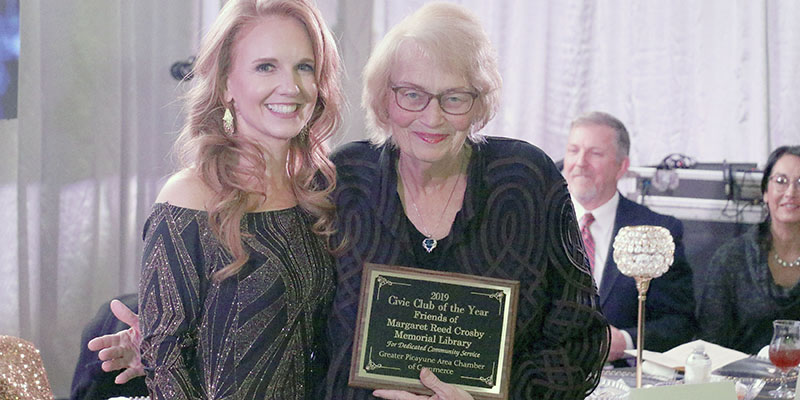 Kathleen Holland accepts the Civic Club of the Year Award for Friends of the Margaret Reed Crosby Memorial Library in this file photo from the 2019 Chamber of Commerce Awards Banquet. File photo by Jeremy Pittari

Prior to her passing on Jan. 3, Kathleen Holland was central to the Pearl River County library system for many years, and was well known in the Picayune community for her warmth and determination.

“She was a mentor and a guiding light and she was an eternal Girl Scout,” said Friends of the Margaret Reed Crosby Memorial Library Chairman Linda Hanberry.

Holland served her community by volunteering with the Friends of the Library, serving on the library Board of Trustees, and was a member of the Red Hats, Republican Women of Greater Picayune, the Garden Club of Picayune, and the Pearl River County Historical Society.

Holland volunteered with the Friends of the Library alongside her husband Clifford Randy Holland for over 20 years.

Holland called volunteers to help during the annual library book sale, and served as program director, said Pearl River County Library System Director Carol Phares. Holland always wanted to understand why things worked the way they did and see if it was possible to improve them, said Phares.

“She was a very genuine person, very dedicated, and she saw education and the library as a central focus for any community and she just made sure that she supported that,” said Shirley Stough, president of the library system’s Board of Trustees.

Holland was politically active and always asked politicians whether they had a library card. She also organized events like last summer’s candidate meet and greet in Margaret Reed Crosby Memorial Library’s Holland Hall, said Friends of the Library member Jo Scheel, who served on the organization’s Board with Holland for 13 years. The hall itself was named for Holland and her husband.

Holland and her husband organized a library visit for the Pearl River County Board of Supervisors one year, which led to an increase in the library’s funding, said Phares.

“They had no idea that the library did what it did and that the operation was as big as it was,” said Phares.

Holland was a champion for library fundraising and took every opportunity to share that passion with others, said Stough.

“I greatly admired her,” Scheel said. “She was a wonderful person. She was a real unassuming leader. She led because she was so enthusiastic about it, without having to force people to do things. She could just convince you to do it.”

Holland knew how to accomplish goals, and did not take no for an answer, Phares said.

“She’d come up with a brilliant idea to motivate you to do more than you were doing, and she had a wonderful smile that was contagious,” said Hanberry.

She was also always willing to help and always encouraged others to help, including the Girl Scouts she led.

“I always thought that was very special for her to take those girls under her wings in that way,” said Scheel.

Holland’s warmth and determination will be missed in the library and the community.

“I’m going to miss her very very much,” said Phares. “She’s left a hole in my heart.”