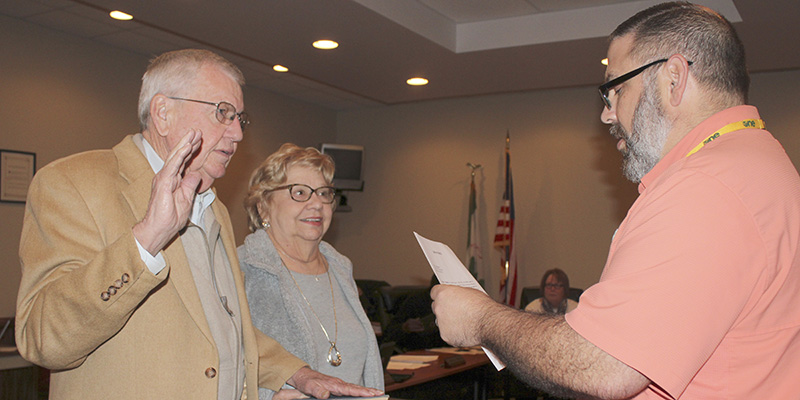 Oath of office: Current city Judge Richard C. Fitzpatrick takes the oath of office at the Poplarville Board of Aldermen meeting Tuesday. Fitzpatrick was reappointed, along with the city attorney, prosecuting attorney and public defenders. Cathy Cook | Picayune Item

Interim Fire Chief Donald D’Antonio gave the Poplarville Fire Department end of year update for 2019. Of the Department’s 444 calls in 2019, 36 were fire related, 323 were for Emergency Medical Services, 12 were for hazmat, 16 were service calls and 16 were false alarms, D’Antonio said.

The city’s response time was an average 4.8 minutes and the department’s staff put in 1,500 training hours this year.

Mayor Rossie Creel also recognized the firefighters because he received a letter from a woman who the department assisted with purchasing Christmas gifts and dinner on Christmas Eve.

The Board entered executive session to discuss personnel matters in the police department and interview applicants for fire chief.

—Approved payment number 3 of $56,870 to Hensley R. Lee Contracting for the 2019 Road and Bridge Bond program. The payment is for the work on Martin Luther King Jr. Drive that was conducted in December, said Public Works Superintendent Sam Hale.