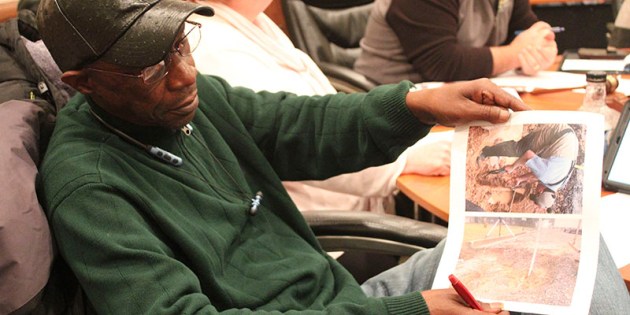 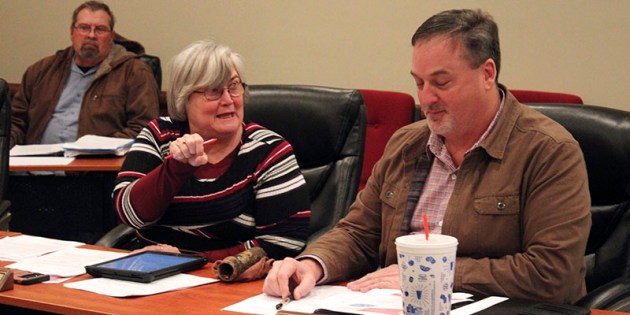 Board members Shirley Wiltshire and Russell Miller discuss drainage at Tuesday's Board of Aldermen meeting. Photo by Cathy Cook.

An additional $57,940 will be devoted to drainage work from Poplarville’s 2019 Road and Bridge Bond Program, which decreases the amount of funds in the bond program that will be available for asphalt paving.

The change order approved by the Poplarville Board of Aldermen Tuesday is to install a new drainage system on Jordan Street to address persistent flooding. The original contract with Hensley R. Lee Contracting did not include work along Jordan Street, said Jason Lamb of The Walker Associates via email. Flooding along the street became more frequent in 2019 and the Board asked The Walker and Associates to evaluate adding drainage work to the Phase 2 drainage contract since the work was similar to other sites in town, said Lamb via email.

Drainage work is in progress on West Beers Street and the only remaining drainage work is two sites along Jordan Street. Each of the sites that have undergone drainage work will require repairs to the asphalt, which will be part of the program’s other phase later in the year under a separate contract.

Work to improve drainage on Beers Street and Jordan Street also found a fragile water main, Lamb told the Board, so he recommended the city abandon the line and reconnect homes in that area to a newer water main. Lamb estimated the cost for the work would be over $40,000.

To ensure there are still funds in the bond program available for paving, Lamb recommended the city use funds from the public works budget and the funds given to Poplarville from the Internet sales tax to address the issue.

The Board directed Lamb to seek quotes for work to abandon the water main and reconnect the 15 homes affected.

The next Board meeting will be Tuesday Feb. 4 at 5 p.m. in City Hall.