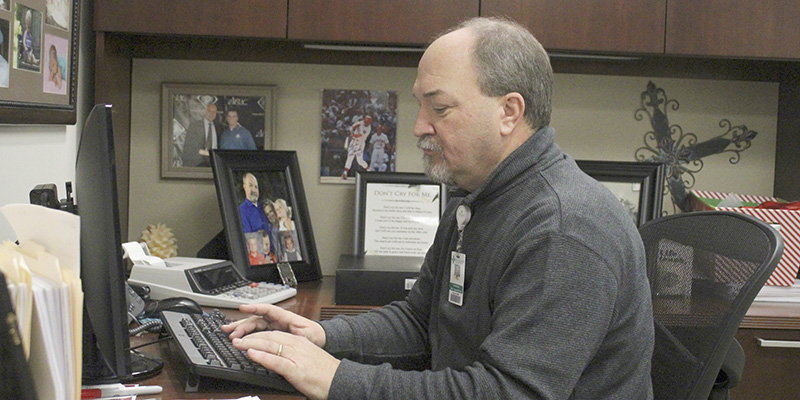 INTO THE FOLD: Highland Community Hospital Regional Administrator Bryan Maxie works in his office Tuesday. Forrest Health is set to take over day-to-day administration at the county’s other hospital, Pearl River County Hospital and Nursing Home, in February. Photo by Cathy Cook

February 1 is the proposed start date for the lease, said Highland Community Hospital Regional Administrator Bryan Maxie. The lease has not been signed yet, because language in the lease still has to be finalized to ensure scheduling language matches, said Maxie. The lease should be closer to finalized at the next Supervisors meeting on Jan. 22, said District III Supervisor Hudson Holliday.

The lease would be county to county, but leadership of the hospital operations would fall under Forrest General, said Maxie. The proposed lease is for 12 years with two options for 10-year lease renewals, so the lease could be maintained for up to 32 years, Maxie said.

Current hospital staff will have to go through an application and interview process to continue working at the hospital under the new administration, said Maxie.

“Everybody there will be given first opportunity for jobs that remain, and they will have to apply online. They will go through an onboarding process just like any new employee,” Maxie said.

Forrest Health has no plans to reduce the staff, said Maxie, but will be “rightsizing,” the staff after administrators determine the number of patients served and the staffing level needed to be financially sound.

Maxie said he believes the employee benefits packages will improve.

“I don’t know of anything that employees will lose. Basically, they will gain a better benefit package and more security in their job when it comes to an organization that they work for that’s stronger and financially sounder.”

At a Board of Supervisors meeting in December, hospital employees raised concerns about losing their accumulated paid time off and having lapses in their insurance during the transition, so the Item asked Maxie to address those concerns.  Maxie said employees should feel comfortable that they will be taken care of.

“I don’t know the exact details of all of that, I just know that (the benefits they have now) will carry over,” Maxie said.

Maxie and a Forrest General HR representative met with the hospital’s leadership on Monday and meetings with hospital employees were set to take place all day Wednesday.

Previously scheduled meetings with hospital staff in December were canceled because the Board delayed passing the resolution, Maxie said.

District I Supervisor Donald Hart said he has visited other counties where Forrest Health runs rural hospitals and spoke with employees at those hospitals and supervisors in those counties. Based on those conversations, he believes the transition will be smooth for employees.

“Everybody said it was a smooth transition with the shift from county level to Forrest (Health), and so I haven’t gotten any negative feedback,” Hart said.

Along with three facilities in Hattiesburg, Forrest Health runs five rural hospitals in Mississippi, said Maxie. One of those hospitals is Highland Community Hospital in Picayune.

The first steps will be a thorough cleaning of the hospital and quick cosmetic fixes, like fresh paint and outside landscaping.

Maxie said patients will not see a significant change at the hospital, other than additional technology and cosmetic improvements in the facility.

The Pearl River County Hospital and Nursing Home Board of Trustees will be dissolved, and Forrest Health plans to dissolve the current Highland Community Hospital Advisory Board, said Maxie. Then a single Advisory Board will be created and will include community members from across the county, he said.

The hospitals would update the Advisory Board on hospital business, and its members would offer advice, but would have no decision-making powers or financial authority, Maxie said. Forrest Health would manage day-to-day operations.

The administration plans to engage with the community and support and engage with Pearl River Community College’s nursing program, said Maxie.