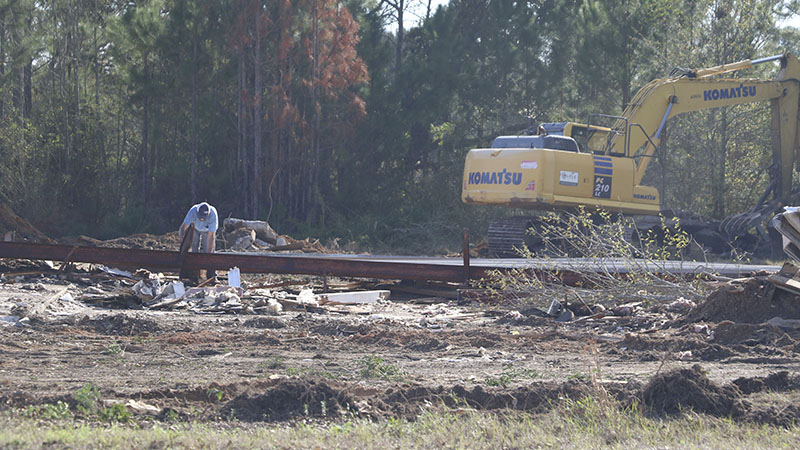 An old Hillsdale area gas station was demolished Monday in an effort to improve the appearance of the community, said property owner Mark Gibson.

The gas station was located at 28 Hillsdale-Gumpond Road and the Pearl River County Board of Supervisors ordered the property cleaned at a public hearing in December, according to previous coverage.

The county has been trying to get the property cleaned up for over 10 years, said Holliday, which took time in part because at one point the lot was divided into at least 20 small parcels, Holliday said. Additionally, some of the previous property owners inherited the land and were difficult to find.

Gibson tracked down the different owners and purchased the property, Hudson said. Gibson finally acquired all of the lots after the public hearing, he said. The cost of cleaning the property was approximately $15,000, said Gibson, who currently has no plans for the land.

The order required Gibson to cut weeds, remove dilapidated fences and outside toilets, according to previous coverage.

“I was just trying to improve the looks for the Hillsdale community, because it has been an eyesore for the whole community up there for a bunch of years,” Gibson said.

Currently Gibson’s only plan for the land is to plant grass.

As of 2017 Gibson was also developing a 16 unit building at Stevens Street and North Harvey Avenue for senior citizens who are 65 years and older, according to previous coverage.

Gibson said he is still the property owner for the development, and plans to get back to work on the project in the next 30 days. The project has been on hold because he has too many other projects that he has been focused on, he said.

However, the project already has a waiting list of people interested in moving in to the building, Gibson said.

According to previous coverage, the development came under fire from nearby residents and business owners who said it was being built in a flood zone and might attract unwanted clientele.

Gibson said the property was built on a floodplain, which meant the property had to be elevated six feet leading to more money being spent on fill dirt than anticipated.

Board hears update on bridge construction and honors local…