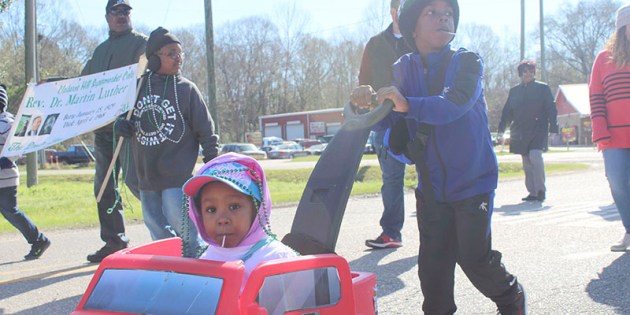 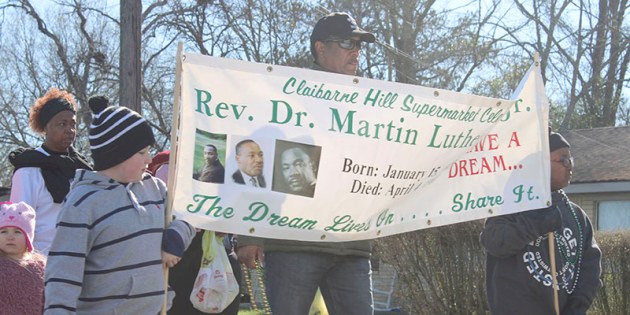 Members of the community and local leaders marched down Rosa Street and up Beech Street Monday morning as they held signs and wore shirts commemorating Martin Luther King Jr.’s memory and message. On the signs, King’s birth date of January 15 and his date of death of April 4, 1968 were listed. The event’s theme was “Where do we go from here?”

Participants in the parade threw beads and candy to onlookers, and paused to hug friends watching from the sidewalk. The parade traveled from Pleasant Valley Baptist Church to Rose of Sharon Church of God in Christ. Participants then gathered inside the church to commemorate King with prayer, scripture and music.

Reverend Tommy Hart and Letitia Hart brought attendees to their feet with their singing.

Lavern Guy spoke about the history of slavery and racism in the United States. Guy described the horrific conditions people taken from Africa were subjected to when they were transported on slave ships across the Atlantic.

“We are the descendants of these people that made this horrific voyage,” Guy said. “The people who survived that are the strongest…We are here today because of our strong ancestors.”

Guy also described the racism his grandfather experienced after he returned from military service, before calling for more Black teachers and more Black employees in city hall.

Anthony Quinn recited from King’s speeches, “I Have a Dream” and “I Have Been to the Mountaintop,” and was met with a standing ovation.

Then Bruce Staten shared his own dreams and life story, from growing up in the 50s and 60s interested in television repair and electronics, to owning his own TV repair shop and working for Lockheed Martin.

“Don’t ever give up on your dreams,” said Staten. “If I can be a kid back in the 50s and 60s and have that type of ambition, and stick with it, what can you do today?”

Staten encouraged young men and women to seek out fields where they can build long term careers.