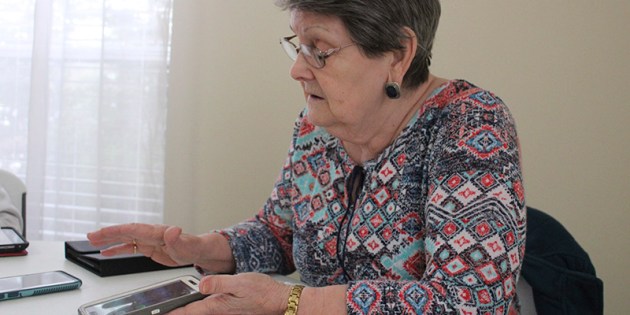 Phyllis Stockstill demonstrates how to connect to WiFi with a smartphone for attendees at her monthly computer class. Attendees typically come in with questions about using their smartphones. Photo by Cathy Cook. 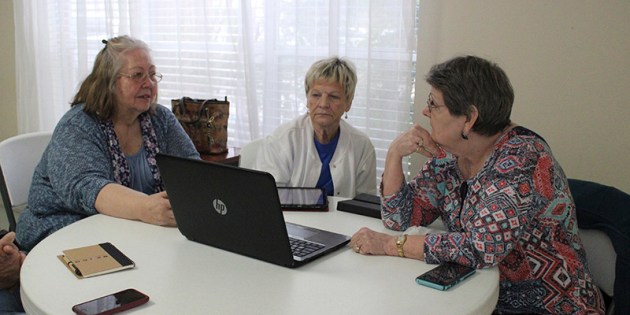 A monthly technology class at the Senior Center of South Pearl River County is helping seniors navigate the world of smartphones, tablets and laptops.

Phyllis Stockstill began teaching the class when she retired.

“I felt like I had been blessed with the ability to learn about computers and thought it would be an opportunity to give back,” Stockstill said.

Throughout her life Stockstill has been in workplaces where using computers and adapting to new technology was part of the job, she said. She is more familiar with computers running the Windows operating system, she said, but is able to help answer questions about smartphones running the Android operating system or iPhones running iOS. After she began teaching the class, she purchased an iPad so she would be able to learn to navigate an Apple device.

The class always begins with whatever questions or specific issues that brought attendees to the class that day. Often, people come to the class to learn about a new smartphone they have been given as a gift, Stockstill said.

On Thursday, Marcel Reynon attended the class for the first time for exactly that reason. His daughter gave him a smartphone to replace his flip phone, he said, and the device can be frustrating enough that sometimes he’s tempted to throw it away.

“Don’t do that,” said Stockstill. “They can do so much for you once you learn how to use it.”

Stockstill believes that smartphones are incredibly useful, but recognizes that navigating them can be intimidating for people who grew up in a world without them.

When she first started teaching the class, Stockstill focused on using computer programs like Word or Excel. However, most of the questions people ask concern using their smartphones, she said.

In Thursday’s class, Stockstill showed Reynon how to delete apps from his phone, helped another attendee solve an issue she was having with Word, and taught the class of four about the ins and outs of connecting to WiFi with their phones.

Stockstill encourages people to utilize new technology, even though it may be intimidating.

“Use these gadgets. They’re so useful—that’s why young people walk around with their phones all the time,” she said.

The free class meets on the second Thursday of the month at 1 p.m. in the Senior Center of South Pearl River County.