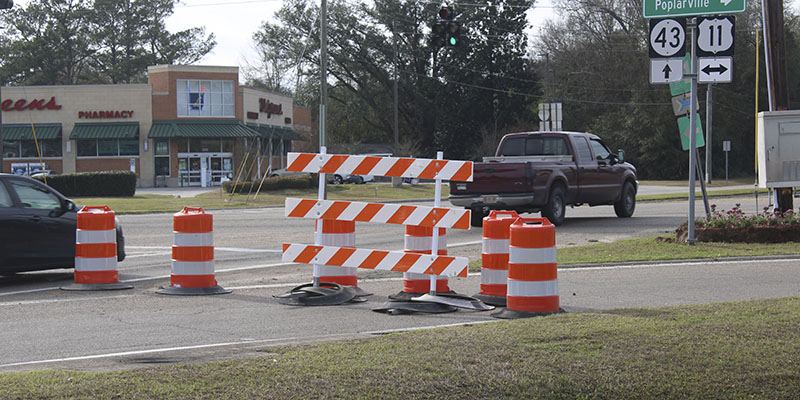 Traffic delays: Motorists in the Picayune area will need to prepare for delays as work to widen Highway 11 ramps up. Thursday afternoon, this turn lane at the intersection of Highway 11 and Highway 43 North was closed. Cathy Cook | Picayune Item

With the Highway 11 widening project now underway, traffic between Cayten Street and Lakeshore Drive will be tapered to two lanes for at least the next several months.

Turn lanes are available at intersections with street signals, said Mississippi Department of Transportation engineer Dexter Childs, but in most sections of the road traffic has been shifted to two adjacent lanes. Drivers can expect some delays while the center lane is unavailable along the highway, said Childs.

The project is expected to last three years, but could be slowed down during the construction process, said Childs.

The contractor will begin drainage work on Monday, said Childs, and he believes utility relocation work is still being finished.

No road closures related to the project are expected in the next week, said Childs, but access to some side streets could be temporarily restricted. The traffic diversion plan for phase one of the project is broken into five sub-phases. The first sub-phase should take a few months, said Childs.

Closures of side streets during the course of that first phase may affect the following six local roads: Carter Street, Laird Street, East Sycamore Street, Stemwood Drive, Highland Parkway and Country Club Road, according to the traffic diversion plan. The contractor is not allowed to close more than one side street at a time and road closures are limited to seven calendar days, the plan states. Every day of excess road closures will result in a $5,000 fine, according to the plan.

Drivers should be aware of potential traffic delays and keep an eye out for workers along the construction route, said Childs.