Krewe of the Pearl set to roll this Saturday in downtown 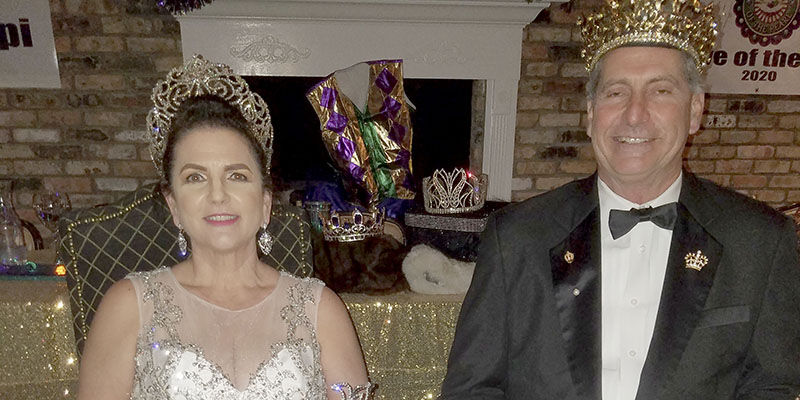 Head of the court: Pictured are the 2020 Krewe of the Pearl Queen Gina and King Raymond Rivero. The Krewe will parade this Saturday, February 1st in Picayune. Submitted Photo

Picayune’s Krewe of the Pearl will roll the annual Mardi Gras parade Saturday at 2 p.m.

The parade theme is “A Night at the Rodeo,” and the Krewe’s King and Queen are Ray and Gina Rivero of Carriere.

The parade will begin at the 1400 block of Goodyear Boulevard in Picayune, before turning right onto Highway 11 South. Then the route will turn right down West Canal Street, right onto Kirkwood and end at Crosby Commons.

The parade will feature floats, dance groups, the Picayune Memorial High School marching band and a fire truck from the Silver Slipper Casino, said co-captain Debbie Craig. There are 15 units signed up for the parade and more are expected by Friday, said Craig. Throws include candy, beads and novelty items.

The family friendly event celebrates the tradition of Mardi Gras and promotes fellowship and friendship in town, said Craig.

“We hope as the years go by, the parade will be bigger and the route will be longer,” said Craig.

The Krewe was established in 2012 and was originally sponsored by Picayune Main Street and the Chamber of Commerce, said Craig. In 2017, the group became an independent nonprofit organization.

There will be a post parade block party at El Mariachi for parade participants. People can still sign up to ride in the parade on a float for $40 or join the Krewe for $100 per person or $150 per couple. Entry forms can be picked up from Tina Stockstill at John Pigott Allstate.