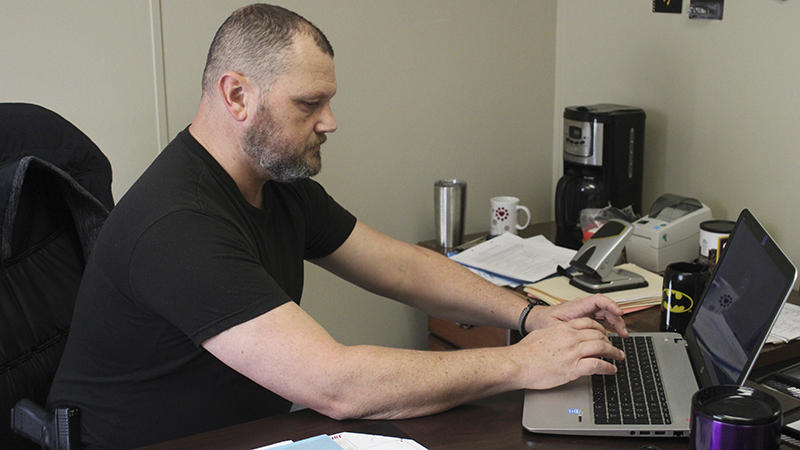 Cathy Cook | Picayune Item Leg up: Fifteenth Circuit Intervention Court Field Officer David Lewis reviews paperwork in his Millard office on Monday. Lewis also works as a case manager for the court. His job is to help participants of the court get back on their feet.

Drug courts offer an alternate path for people convicted for drug related crimes in Mississippi, and are supposed to expand to include courts for veterans and people with mental health issues.

Participants in the program are screened through a series of questions and a judge determines if the person is a good candidate for the program, said David Lewis. Lewis works as a case manager and field officer for the Drug Court office in Pearl River County. There are currently 63 participants in the program within this county. If they successfully complete the program, their process charge is expunged from court records, Lewis said. Those charges are typically felony related drug charges such as possession of a controlled substance with intent to distribute.

To stay in the program, participants have to take weekly drug tests, and meet weekly with other people struggling with addiction, Lewis said. Part of the process for completing the program also includes getting the driver’s license of the participants reinstated, acquiring a library card and tasking them with reading books about sobriety and writing reports on what they learned, Lewis said. Participants are required to pursue an education or find work, said 15th Circuit Court Judge Prentiss Harrell. Work requirements can be met by participants who may be taking care of a baby or elderly family member, and education requirements could include earning a GED or attending a vocational school, Harrell said.

If participants need in-patient treatment, the court sends them to those appointments on its budget, so the only cost to participants includes court fees, fines or restitutions, Lewis said.

“We’re here to help people succeed,” Lewis said. “I don’t want to see any of my participants fail. I have a really good group of people.”

Mississippi was well known for having the third highest incarceration rate in the country, said Harrell, and 85 percent of people who are released from a penitentiary go back. However, only 15 percent of participants fail the court court, Harrell said. People who fail the program are incarcerated.

Pearl River County sends more participants to the court court than other counties in the 15th District, Harrell said.

“It saves taxpayers a lot of money. It saves lives. Mothers are reunited with their children. It’s a big deal, and I’m proud to be part of it,” Harrell said.

Court court participants work and pay taxes, instead of being incarcerated, which saves taxpayers the cost of keeping them incarcerated, Harrell said.

Both Lewis and Harrell believe the plan to bring the veterans and mental health courts under the umbrella of intervention court will work well locally.

“I’m a veteran myself, and I think it would be outstanding,” Lewis said.

Harrell said he believes money saved by intervention courts should be reinvested in them.

“Veterans courts are a great need and blessing because veterans sometimes do have different (needs),” Harrell said.

Many other states already have programs similar to the planned veterans and mental health courts, Harrell said.

Lewis previously worked as a police officer on patrol and said he wishes the court court had existed earlier.