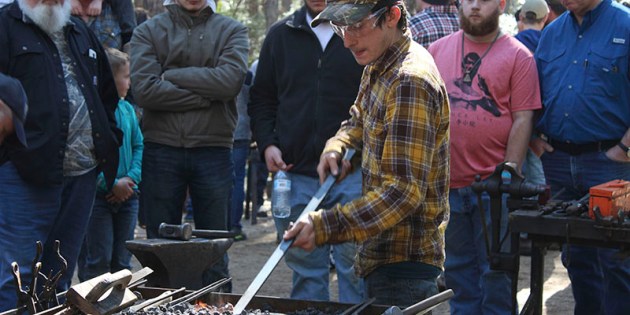 Blacksmith Charlie Polk heats metal during a demonstration at the Crosby Arboretum’s Forge Day Saturday. At 17, Polk is one of the younger Gulf Coast Blacksmith Association members, but not the youngest. Photo by Cathy Cook. 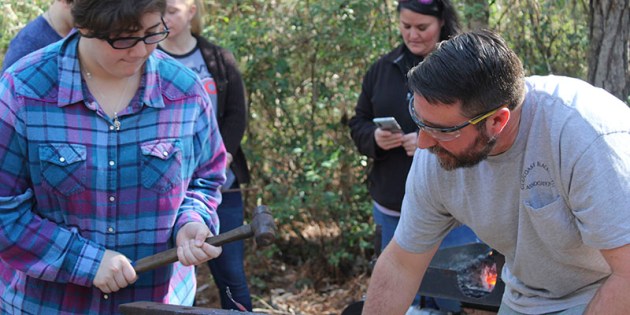 Isabel Santana learns how to use a blacksmith’s tools to make a key chain at the Crosby Arboretum’s Forge Day Saturday. The 12-year-old said it was fun to experience metalwork first-hand. Photo by Cathy Cook.

Bremer was so excited to show off the arrowhead he created, that he almost forgot to return his safety glasses.

Bremer had never tried his hand at metalwork before, but the reality TV series Forged in Fire made him enthusiastic to learn, said his father, Trevor Bremer.

Isabel Santana also wanted to try metalworking for herself after seeing it on TV, she said. The 12-year-old homeschooled student likes woodworking and metalworking and said it was fun to experience being a blacksmith first hand.

To Santana, the event gave her an opportunity to experience something she was studying—metallurgy—first-hand, said her mother, Anna Laura Davis.

“We’re a teaching organization. We want to get people interested in learning,” said Lott.

The association currently has 60 members and there are no certifications required to join, only a $25 yearly membership fee. Many members are hobbyists, with a handful of professionals, Lott said.

“If the kid can swing a hammer, they can join,” said Lott.

One of the younger association members demonstrating at a forge Saturday was 17-year-old Charles Polk, who began learning seven years ago. Forge Day helps preserve the art of metalwork, said Polk.

Interest in blacksmithing has decreased over the years, said Lott, but Forged in Fire has changed that trend.

“With Forged in Fire going on TV, everybody wants to try it,” Lott said.

Along with an increased public interest in metal work, Forge Day itself has grown larger, with more blacksmiths participating than in previous years. There were 12 blacksmiths teaching at Saturday’s event, said Lott.

Forge Day sprang from the Pineywoods Heritage Festival after visitors expressed excitement about blacksmith Terrel Pickett demonstrating his work at the annual event, also held at the Arboretum. Arboretum Director Pat Drackett said Forge Day is held in January, when visitor numbers tend to be lower.

The next Arboretum event will be a winter botany field walk on Saturday, Feb. 8. To learn more about the Gulf Coast Blacksmith Association visit the group’s Facebook page or contact Lott at elottgcba@aol.com.