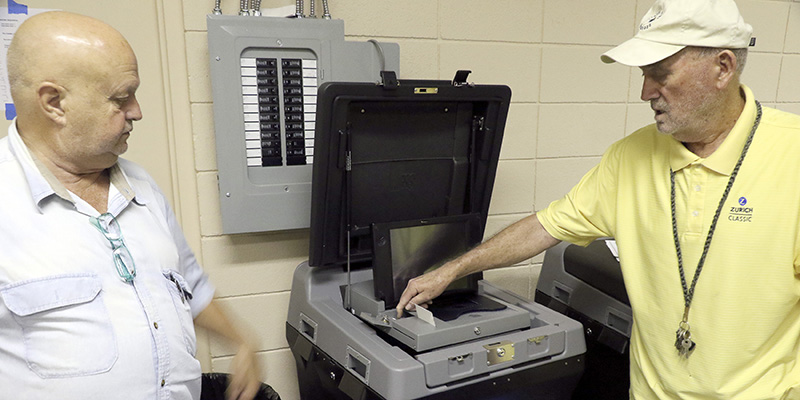 Paper trail: From left, Pearl River County Election Commissioners Tommy Breland and Reggie Hanberry run one of the county’s new paper based voting machines through its paces before being used for the first time last year. File photo by Jeremy Pittari | Picayune Item

The voter registration deadline for the statewide Democratic and Republican Presidential primary elections is fast approaching.

County residents who will be 18-years-old on or before the general election day Nov. 3 are eligible to vote in the primary elections on March 10. The deadline to register for that election is Feb. 10. Representatives from the Pearl River County Circuit Clerk’s office will visit all three local high schools to help younger voters register and give them information on the upcoming election, said Circuit Clerk Nance Stokes.

Independent candidates will not be on the ballot until the general election in November. On the ballot are candidates who represent the Democratic and Republican parties in the presidential election, the race for a United States Senate seat and for U.S. House of Representatives 4th Congressional District. When they go to the polls, voters decide whether they want to vote in the Democratic or Republican primary.

Absentee voting began Monday, said Stokes, and the Circuit Clerk’s office will be open the Saturdays of Feb. 8, Feb. 29 and March 7 from 8 a.m. to noon, to make it easier for voters to find time to register or cast an absentee ballot ahead of the election.

The only Senate candidate in the Republican primary is current Senator Cindy Hyde-Smith.

Turnout is typically higher in a presidential election year, said Stokes, although primaries usually have lower voter turnout than a general election.

Pearl River County’s election turnout for the presidential primaries in 2016 was at 33 percent with 10,847 ballots cast, which is much higher than the 2018 primary when only 10 percent of registered voters cast 3,509 ballots.

The 2016 general election had 19,520 ballots cast, which means that in the last presidential race 57 percent of the county’s registered voters cast ballots.

To learn more about voter registration, contact the Circuit Clerks office at 601-403-2328 or visit yallvote.sos.ms.gov.