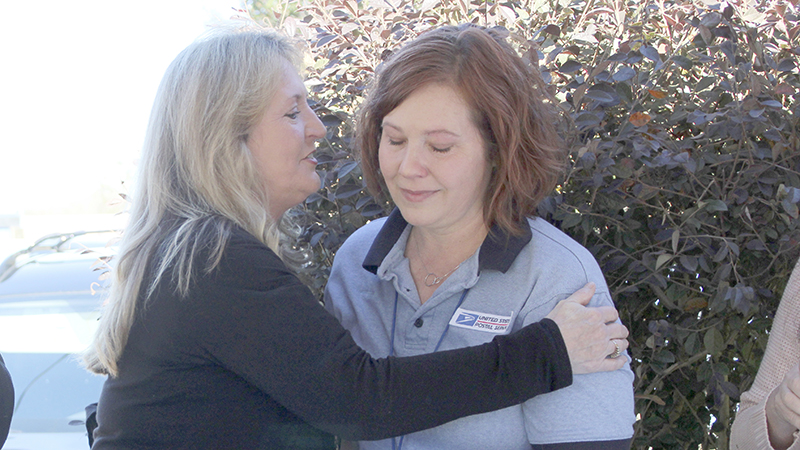 The Carriere postmaster retired Tuesday after more than three decades of service.

Sheila Mitchell offered service with a smile for 35 years at the Carriere post office.

Mitchell graduated from Pearl River Central High School, which is located across the street from the Carriere post office, and then began working as a rural carrier, before becoming a clerk, she said. Mitchell became postmaster in 2001.

Some of the customers have seen Mitchell on the job throughout her entire career.

“I always felt like I make a difference. I always went out of the way to help customers,” Mitchell said.

Mitchell’s daughter, Jennifer Mitchell, said she learned a lot by watching her mother work hard over the course of her career.

“They’re synonymous, the Carriere post office and my mama,” Jennifer said. “She taught me how to raise a family by working hard.”

The employees she worked with will also miss Mitchell’s presence. Clerk Carmen Hart said Mitchell’s standard for customer service went above and beyond the postal standard and her friendly presence will be missed.

“Everybody walks in and goes, is Ms. Sheila here today?” Hart said.

“She was more than a boss—she was a friend,” White said.

Wanda Ladner, who described herself as a career clerk and Mitchell’s right hand person, said the Mitchell was focused on customer service and will be greatly missed.

Shane Hodges, manager of southern Mississippi post offices, presented Mitchell with a letter of recognition for her service. Hodges said post offices function as a cornerstone for a community, and the postal service’s reputation is built on the service of people like Mitchell.

Interviews for the next postmaster are ongoing, said Hodges.