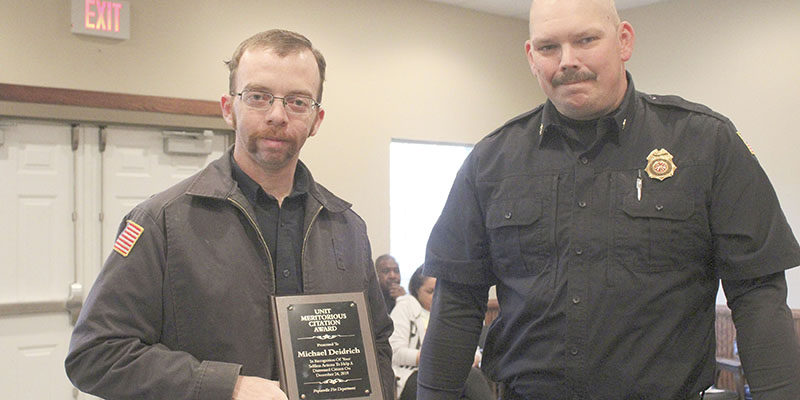 Community minded: Firefighter Michael Diedrich, left, is recognized by Fire Chief Jason Bannister for going above and beyond his duty on Christmas Eve. Firefighters Diedrich and Donald D’Antonio, not pictured, were both given Unit Meritorious Citation Awards. Cathy Cook | Picayune Item

Two Poplarville firefighters were recognized for providing service above and beyond their duty during Tuesday’s Board of Aldermen meeting.

Firemen Michael Deidrich and Donald D’Antonio were recognized by Fire Chief Jason Bannister for assisting a woman who came to the firehouse on Christmas Eve asking for help because she could not afford Christmas gifts or dinner and was worried about ruining Christmas for her child, said Bannister.

The city received a letter from the woman thanking the two firemen for purchasing gifts and Christmas dinner for her family from their own pockets.

The two firefighters went to the dollar store and bought Christmas gifts and purchased groceries so the family would have Christmas dinner and even put fuel in her car, said Bannister.

The Board of Aldermen commended the firefighters for assisting the woman at their last Board meeting. At that meeting, Mayor Rossie Creel read the letter, which described the help the firemen offered as “a Christmas miracle.”

Bannister gave the two men Unit Meritorious Citation Awards. D’Antonio was not present at the meeting.