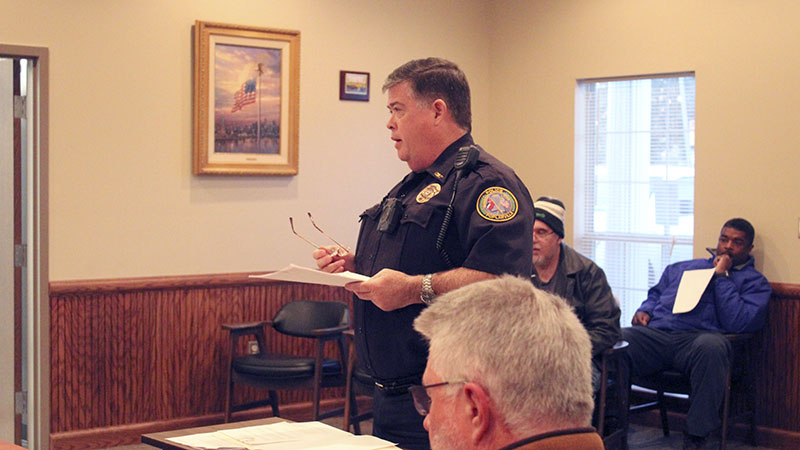 CAM POLICY: Poplarville Police Chief Greg Hartley speaks to the Board of Aldermen about the need for a dash and body camera policy for his department. Photo by Cathy Cook

The Poplarville Board of Aldermen approved a policy for the Police Department in relation to the use of dash cameras during Tuesday’s meeting.
The policy is similar to Picayune Police Department’s policy, said Chief of Police Greg Hartley. Poplarville’s department did not have a previous dash camera policy. The Board took under Hartley’s recommendation advisement to allow them to revise the policy for body cameras.
The body camera policy will be rewritten to ensure the language makes it clear that both full and part time officers must wear cameras before Hartley brings it back to the Board. Both policies include rules about how to download and save the video evidence, said Hartley.
In a separate matter, the Board approved a travel request to send Poplarville Fire Department Captain Donald D’Antonio to an aircraft firefighting rescue course that will cost $800 and to attend a fire inspector course that will cost $885. The aircraft firefighting course is recommended by the FAA, said Fire Chief Jason Bannister. The inspector course needs to be taken, because firefighters in the department must be qualified as a fire inspector, said Bannister. The Board also approved sending a firefighter to take his candidate physical agility test at an expense of $50. The three classes will leave approximately one third of the department’s $5,000 training budget for the rest of the fiscal year, said Bannister.
In a separate matter, the Board took adding supplemental 10-hour shifts on Saturday and Sunday for part time firefighters in the city’s fire department under advisement. Adding the shifts would cost the department $9,800 annually, said Bannister.
In other business the Board:
—Approved purchasing turnout gear for Fire Chief Jason Bannister for $3,000.
—Accepted the resignation of police Sergeant Daniel Collier, effective April 1.