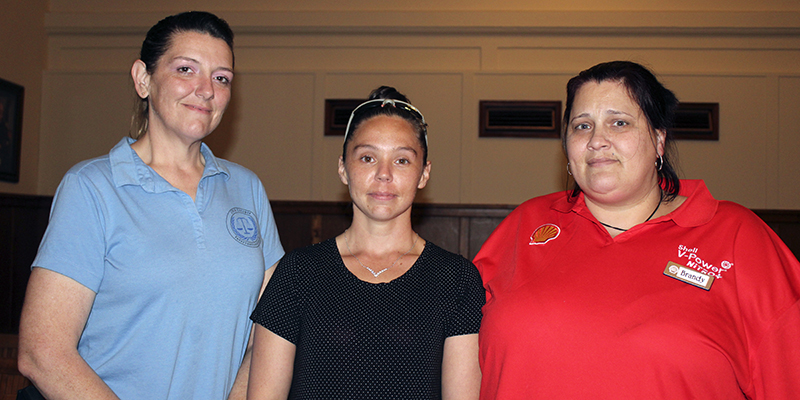 From left, case manager Casey McInnis, and intervention court participants Jamie Mitchell and Brandy Treadway. Mitchell and Treadway are both preparing to graduate from the program in May. Photo by Cathy Cook.

After being convicted of felony drug charges, Brandy Treadway and Jamie Mitchell were told by their friends that participating in intervention court to adjudicate those convictions would only set them up for failure and they would be better off serving their prison time. But now, both women are preparing to graduate from the program in May after maintaining sobriety for three years.

“I smoked crack for 13 years. If I can do it, I know the next person can,” Treadway said.

Treadway previously went to prison three times and has been on probation and parole, but none of those experiences helped her achieve sobriety, she said.

“It didn’t have the effect that intervention court has,” Treadway said. “I would’ve never changed.”

For the first time in a long time, Treadway is living a sober life, and paying her rent, electricity bill and car payments.

Randall Smith has been in the program for two and a half years, he said, and it’s made him more organized.

“It changed my life big time,” said Mitchell. “If it wasn’t for intervention court, I wouldn’t be clean.”

The program has been effective for Mitchell and Treadway because it holds them accountable, the women said.

“We’re not on our own. We have help,” said Mitchell.

“They really do have to want it. They have to fully commit to changing the people, places and things in their life,” McInnis said.

Twice a month, intervention court participants gather in the Pearl River County Courthouse in Poplarville and share updates about their lives with intervention court staff. At just such a meeting held Thursday, each participant stood and told 15th Circuit Court Judge Prentiss Harrell about their education plans, workplace updates, recent holidays spent with kids and family deaths or hospitalizations. Harrell’s responses were part encouragement, part lecture and he was quick to remind case managers to help participants find the resources they may need, like connecting a woman who says she wants to take an online class with Pearl River Community College. One man shared that his children had a good Christmas and he was able to purchase gifts for them, which was different from a few years ago when he only had $20 because his money went to his addiction.

The participants start by stating their clean date to remind them how long they have been clean and to encourage them to continue their sobriety, said Harrell.

The intervention courts are an alternative to incarceration, said Harrell. Everyone in the program had a felony conviction. Instead of going to prison, they have to work or pursue an education, in addition to attending the weekly meetings and regular drug tests.

On Thursday, the intervention court staff met with 200 to 250 people in the 15th Circuit Intervention Court, beginning with 30 participants in Poplarville, before they traveled to Columbia, Monticello and Purvis to meet with the rest, Harrell said.

Success in the program is often measured by recidivism rates, said Harrell, but legislators also cite the money saved by having babies born drug free. Over 15 drug free babies have been born to Pearl River County participants in the program, said Harrell. After each participant gave their update, every member of the intervention court staff spoke, giving both words of encouragement and practical reminders. When there are issues to address, court staff address them in one-on-one meetings instead of during the group meetings, said McInnis.

New participants were reminded of when, where and how to pay their court fees, while participants nearing graduation were told that of the 59 graduates from last year only five have gone back to prison.

Case manager Marvin Pittman told the attendees to learn to celebrate their progress, instead of feeling overwhelmed by how far they have to go. Before he became a case manager, Pittman was a program participant. In the 15 years since he graduated from the program, the number of people participating has swelled from the 10 in his class to the more than 50 in the county this year.

The hardest part of the program is staying clean, Treadway and Mitchell said.

After graduation, Treadway plans to complete a Certified Nursing Assistant course and wants to continue in the medical field, she said.

“I’m going to live my life sober. I’ve never had that,” said Treadway.