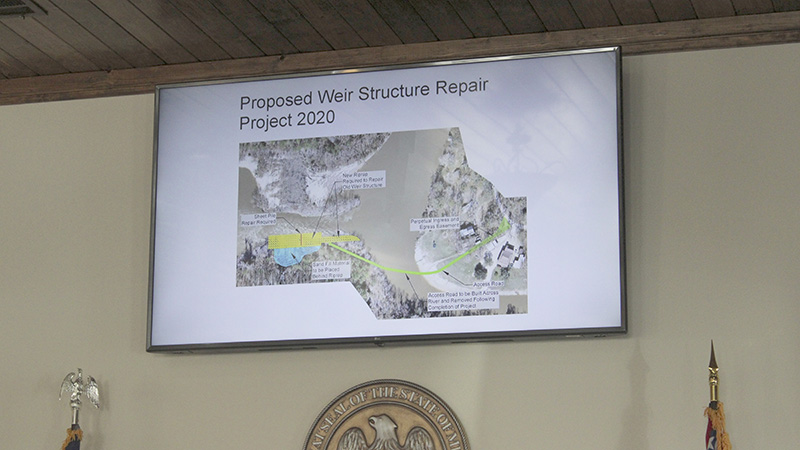 REPAIRS: This image was shared with the public during Wednesday’s Pearl River County Board of Supervisors meeting outlining the proposed plan to repair the weir along the Pearl River near Walkiah Bluff. Photo by Cathy Cook.

Wednesday, Pearl River County’s Board of Supervisors discussed necessary repairs to the weir on the Pearl River near Walkiah Bluff and was updated on ongoing work to repair or replace bridges.

During the meeting, county engineer Les Dungan showed the Board images that reflected the damage to the weir over time. The structure was originally built in 1998, and in 2005 was still in good shape, although the south bank of the East Pearl River began to have issues, Dungan said.

By 2014 there was a significant hole in the riprap, or rock armor, used to prevent erosion and by Dec. 2019 the weir’s structure was no longer straight and began to lean over due to the flow of the water, Dungan said.

Erosion of the structure has accelerated in the last couple of years, Dungan said, which he finds alarming.

An obstacle to phase one will be gaining access to the structure to repair it, said Dungan.

Phase two of the proposed project would include dredging approximately three miles of the East Pearl River. The dredging would construct a narrow pilot channel and not include the entire width of the river, Dungan said. The pilot channel would be dredged to a consistent depth, which on average would be three feet deep, Dungan said. Since dredging a pilot channel was part of the original project in 1998, and the 1998 project states that maintenance will have to be done to maintain the weir, the county should be able to do the work without conducting an environmental impact study, Dungan said.

Mississippi House Representative Timmy Ladner, who was present at the meeting, asked how to best support the project. County Administrator Adrain Lumpkin said putting pressure on the Corps of Engineers to give the county the permit to complete the work without a full environmental impact study would be a huge help.

The process to complete a full environmental impact study could delay the project by three to four years, said Lumpkin.

In a separate matter, Dungan informed the Board that the second bridge on Progress-Silver Run Road is under construction, but traffic should be open on both bridges by Friday. The road will still be under construction, but the contractor will work on the shoulders, Dungan said. The Board approved payment application No. 5 for $118,438 to Magco Inc. for the Progress-Silver Run Road project.

Contractors working on the bridge east of the interstate on Anchor Lake Road and the bridge on Nelly Burks Road are clearing brush and trying to keep the roads open as long as possible over the holiday season while moving forward with bridge repairs, Dungan said. The bridges will be closed in the near future, Dungan said during a phone interview Monday.

Plans to repair the McNeill McHenry Road relief bridge over the Wolf River are complete, but work to replace that bridge will not begin until replacement of the bridges on Progress-Silver Run Road is complete, Dungan said.