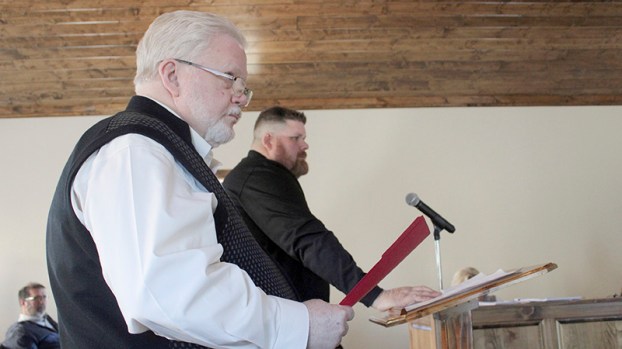 IMPROVEMENT: Property owner Mark Gibson addresses the Pearl River County Board of Supervisors during Wednesday’s meeting about his intention to clean several properties that all house a dilapidated gas station in the Hillsdale area. Photo by Cathy Cook

The Pearl River County Board of Supervisors held a public hearing concerning property maintenance on Hillsdale-Gumpond Road during Wednesday’s meeting.
The county has been trying to get an old gas station located at 28 Hillsdale-Gumpond Road Lot 8 cleaned up for several years, said Code Enforcement Officer Kolby Davis. However, property owners have changed, which made it challenging to arrange a cleanup, Davis said. The dilapidated gas station has been a long standing public nuisance and health hazard, said Davis.
Property owner Mark Gibson was present at the hearing, and said he has been aggressively purchasing all 20 of the seven and a half foot parcels, adding that he currently owns 19. Gibson said that now he owns the majority of the parcels, he will be able to remove the old gas station and clean up the property.
The Board ordered Gibson to clean the parcels he owns, which includes cutting weeds and removing dilapidated fences and outside toilets. Gibson said he would be able to clean up the parcels within the 30 days allotted in the order. However, if the process is not complete after 30 days, the county would be responsible for cleaning up the parcels and place a lien on Gibson’s taxes to recoup the expense.
District 3 Supervisor Hudson Holliday said the Board appreciated Gibson purchasing the parcels so the properties could be cleaned up.
In relation to a separate matter, District I Supervisor Donald Hart said that even though the Small Business Administration’s temporary office in Wiggins will close soon, which was established to assist residents affected by the May flooding with filling out loan applications, disaster assistance from SBA will still be available until January for homeowners and renters or until August for businesses and nonprofits.
The Board then entered executive session to discuss personnel matters and potential litigation.
The next meeting of the Board will be Jan. 6, at 9 a.m. in the Boardroom on West Pearl Street in Poplarville.

Six new designated parking signs have been installed in various parts of Picayune in an effort to reserve those spaces... read more