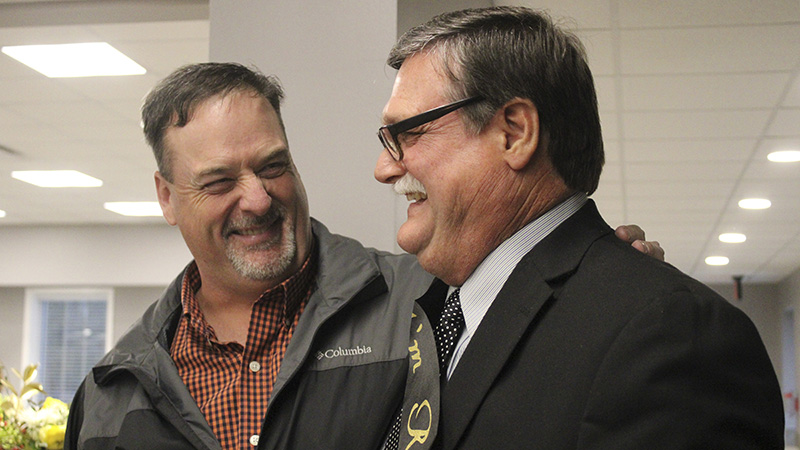 Decades of education: From left Board of Aldermen member Russell Miller congratulates outgoing Carl Merritt on his retirement after more than 40 years working in the education system. Cathy Cook | Picayune Item

Merritt spent 42 years working in education, of which 11 of those years were as superintendent. He began his career in Forrest County as a general science and civics teacher, and also worked as an assistant baseball coach.

Teacher Scott Bond worked with Merritt at the beginning of their careers.

“He was obviously exceptional,” Bond said.

Merritt said he knew by the time he was a high school sophomore that he wanted to work in education as an administrator and coach. He still has weekly phone calls with his high school basketball coach, who had a significant impact on his life.

“Poplarville will always be the highlight of my professional career,” Merritt said.

Merritt’s wife Beverly Merritt is a teacher in the Poplarville School District, and said he was the first superintendent in her teaching career who regularly visited classrooms to check in on students.

“He has dedicated his entire life to taking care of kids and students,” Beverly said.

Merritt’s children attended Poplarville schools, and his son is pursuing a career in education administration.

“He put his whole heart and soul into it,” said Meggie Merritt.

“We’d sit down and meet and speak every morning, and go over everything for the week,” Miller said.