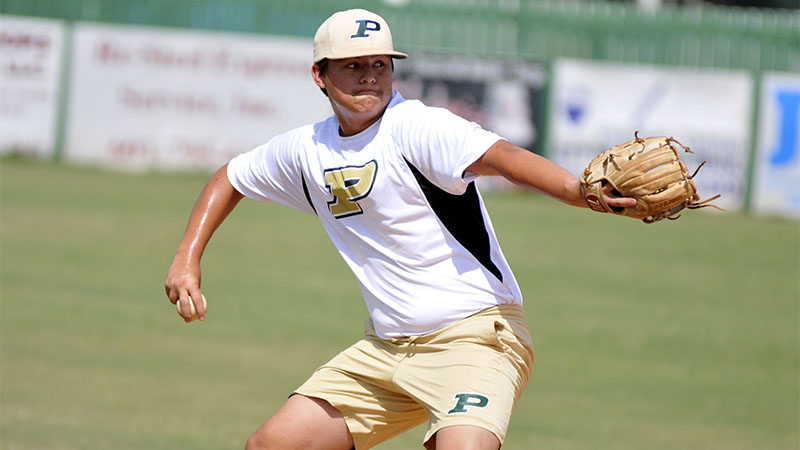 Jonathan Mitchell | Picayune Item In the dirt: Sophomore Eli Goodwin takes a ground ball and fires it to first during a fielding drill. Goodwin went 3-1 as a pitcher last year and had a batting average of .311.

Poplarville’s baseball season won’t be in full swing until the start of the spring semester, but the players are using these preceding months to prepare for the start of competition.

Rain or shine, the athletes are working to improve upon last season’s performance, which saw the team go 21-9 overall and 7-3 in district.

An area of focus for Head Coach Slade Jones has been getting his players in the weight room early and often.

Currently the players are working with high weight and low reps, but as the season draws closer the athletes will transition to low weight with high reps.

The transition in workouts takes place so the players can maintain their strength, while not losing the quick twitch abilities every baseball player needs.

“(It’s) just to stay flexible because we don’t want to lose the weight, so it’s the best of both worlds. We’re making that transition,” Jones said.

Jones said the biggest change within the program last season was the players’ mentality and attitude.

Looking at the big picture, there were several changes made in the interest of the program by Jones and his staff.

Since those changes have been made, this year has been all about the little things.

Working on specific pitches or certain defensive situations has led to the athletes paying attention to the finer details of baseball.

“Last year we had a good look at what the teams are going to be doing to our hitters. We’ve spent a lot of time working on that stuff, working on weaknesses at the plate,” Jones said.

In baseball only nine athletes are in the line up, but having players who can switch to other positions depending on the opponent can be an advantage for teams.

Poplarville will have that luxury heading into the season. Jones said there are 11 to 12 players vying for one of the nine starting spots.

Jones said four to five of those players are flex players, meaning they’re adaptable athletes who can thrive in multiple positions.

This gives the players added experience at the position and gives the coaches a better understanding of the spot for which an athlete is best suited.

“We try to make our practices as game-like as possible. We try to get defensive flex guys at all those positions every day,” Jones said.

Poplarville is coming off a season that saw the team have the best record it’s had in over a decade and the elevated level of play has led to a lot of expectations heading into the season.

To handle those expectations Jones wants his players to be mentally tough.

The athletes have been in big situations on the field, they know how to handle in game pressure.

Now it’s about getting the athletes to understand how to still perform at a high level knowing the expectations are higher this season.