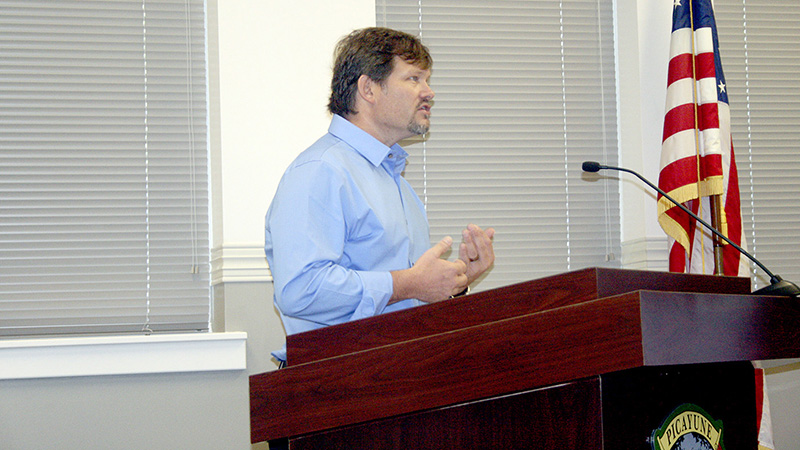 File photo by Jeremy Pittari. At a meeting in 2014, Tyron Gill asks the Picayune City Council to exempt the ad valorem taxes on an airport hangar he leases from the city.

Pearl River County is involved in a court case to determine if a Picayune based business should be exempt from more than $61,000 in back taxes.

The plaintiff is a company called G4, owned by Pearl River County resident Tyron Gill. G4 wants to be exempt from paying more than $61,000 in back taxes on a half million-dollar airport hanger Gill built on land leased at the Picayune Municipal Airport, according to minutes from an April 22, 2015 Board of Supervisors meeting. The company has already paid $34,557 of the owed taxes for 2009, 2010 and 2011 and a petition submitted to the Board requests that money be refunded, according to the petition submitted by Gill’s lawyer Robin Roberts. The taxes are owed to Pearl River County and the Picayune School District, according to previous coverage.

Companies with leases at the Picayune Municipal Airport can be exempt from ad valorem taxes if they use the property they lease for “commercial purposes,” said Roberts during the oral arguments.

During oral arguments presented to the Mississippi Supreme Court on Wednesday, Roberts argued that the company should not been required to get a tax exemption approved. He argued that the exemption should have been automatically applied to the company because of the kind of lease it entered into with the city.

The county’s lawyer argued that the Board of Supervisors had authority to determine whether or not G4 qualified for the tax exemption. The county wants G4 to pay the remaining three years of taxes owed.

The lawyers also disagreed on whether G4 used the hangar for commercial activities. Both lawyers agreed that Gill’s company, Top Flight, has records that aircraft was sold out of the hangar during the years in question. However, the lease for the airport hangar was for G4, not Top Flight. G4’s lawyer argued that Top Flight is an agent of G4. Roberts also said G4 has evidence of commercial activity from those years.

The county’s lawyer, Joe Montgomery, said during the oral arguments that on at least two occasions the city of Picayune found that G4 was not engaged in commercial activity.

Roberts said Gill did not know the city ruled against giving the company the tax exemption in 2010, while Montgomery said because the community is small, Gill would have known about the denial. Roberts also argued that since the county was the taxing authority, it should have investigated whether there was commercial activity being conducted by G4 at the hangar instead of relying on the city’s investigation.

Gill appeared before the Picayune City Council and the Pearl River County Board of Supervisors several times asking them to exempt his company from the ad valorem taxes, according to the 2015 Board of Supervisors minutes. According to previous coverage by the Item, Gill spoke to the Council in 2014 to request that governing body exempt the property from the ad valorem taxes shortly before the hangar was to be sold at a tax sale. According to that coverage, the Council took no action on his request, because its members did not have time to further investigate Gill’s claims that G4 should qualify for the tax exemption.

In 2015, the Council ended G4’s lease and entered a new lease that recognized G4 as exempt from the ad valorem taxes going forward, according to a lease in the minutes of the Board of Supervisors meeting dated April 22 of 2015.

When reached by the Item for comment on the case, Tyron Gill said he needed to speak to his lawyer before making a comment. By press time Thursday, he had not made a comment. A request for comment from County Administrator Adrain Lumpkin was not returned by press time.