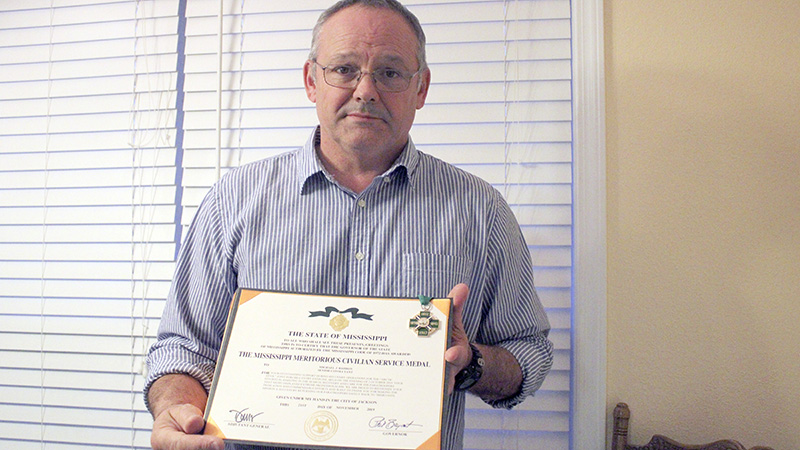 County resident and volunteer firefighter Michael Barron was awarded the highest civilian medal in the state by the governor in November for his support in recovery operations during the Camp Shelby training accident in October that injured over 20 paratroopers.

Barron is a firefighter with the McNeill Volunteer Fire Department and a retired Navy parachutist jumpmaster. He currently works as a contractor at Camp Shelby training soldiers and preparing them through simulated combat scenarios.

Barron and about 30 other civilians were given the Mississippi Meritorious Civilian Service Medal for their support during the recovery of approximately 80 paratroopers who landed off course in trees during a training exercise on Oct. 2. Barron said he was surprised and honored to receive the medal.

On Oct. 2, Barron was on the ground prepared to be part of the combat training simulation when the group was told to stop the training exercise because 80 of the parachuting soldiers had landed in trees instead of on the runway where they intended to land.

“I knew, being a jumpmaster, what ‘in the trees’ meant,” Barron said.

All resources available were quickly brought together to assist the soldiers stuck in the trees, including civilians, soldiers, ambulances and medevac helicopters, he said.

“Everybody was bringing everything for support,” Barron said. “It looked like we rehearsed that 1,000 times.”

Ambulances were tightly packed next to the narrow runway and rescuers used cargo straps to secure ladders to trees in the heavily wooded area, he said.

“Civilians and soldiers alike, we pressed into trees like our lives depended on it,” Barron said.

When he saw that there were plenty of people headed into the woods to rescue stranded paratroopers, Barron said he looked to see what else he could do that would be useful and saw that the triage area where injured people were being treated was poorly lit. Barron had vehicles with large spotlights, which he sent his men to retrieve so they could light the triage area. He also helped direct ambulance traffic on the narrow runway.

Barron said he never seen so many entities collaborate in a rescue operation so quickly and smoothly.

“That’s just something people are supposed to do. People are hurt—you go help. I was hungry and thirsty, but I wasn’t hanging in a tree,” Barron said.