County rivals go head to head in district match up 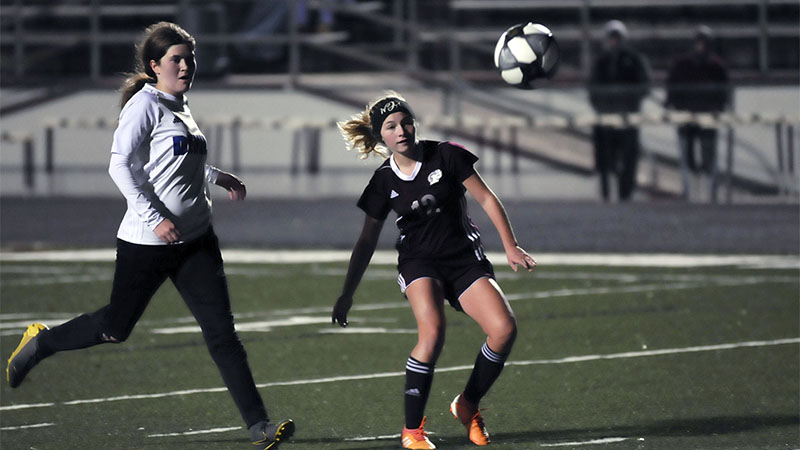 Picayune and Pearl River Central girls soccer teams met Tuesday for a game that ended with a Maroon Tide win. The girls game was the first of the night and the physical match up did not disappoint.

Both teams were evenly matched and the game ended 2-1 in favor of the Maroon Tide.

Picayune’s Head Coach Ed Williams said his team did a good job of possessing the ball, but in the final third struggled to take advantage of opportunities. “Soccer-wise we look good from the back to the middle, then the ball gets up front and it’s like we lose our feet,” Williams said.

For the Blue Devils and Head Coach Joe Weems, the struggle was competing at a high level without several of the team’s starting players.

PRC had five starters out due to injuries and four athletes on the field were playing through injuries of their own, so even though the team lost Weems was happy with their performance.

“The girls were very satisfied considering we had a lot of younger girls on the field. It was a big challenge,” Weems said.

Picayune started the scoring when freshman Kadie Craft maneuvered a shot around the goalkeeper with eight minutes left in the first half.

The Blue Devils recovered and continued attacking Picayune, creating multiple scoring chances to in the second half.

However, Picayune scored again, this time with forward Laila Strong knocking the ball in off a cross to give the Maroon Tide a 2-0 lead.

Four minutes later, a foul by the Maroon Tide awarded the Blue Devils a penalty kick in the box.

Senior Samantha Kennedy calmly stepped up to the spot and slotted home the ball to bring the Blue Devils within one goal. With 20 minutes left on the clock, plenty of time for both teams to try and score again, both defenses prevented scoring for either squad until the final whistle blew, giving Picayune an important district victory.

“We have to find that one thing that gets us over the hill and gets the momentum going. Hopefully it’ll be this (win),” Williams said.

Weems said the loss was a tough outcome for the Blue Devils to stomach, especially with some of the players knowing their opponents after playing with them on recreational or select teams.

However, given the number of injuries, Weems said the focus over the winter break would be getting his injured players back on the field.

The heightened emotions of the rivalry match up saw some very physical play from both sides.

Now the squads will be heading into winter break knowing the back half of the season will determine postseason hopes.

Picayune’s next game will be against Hancock on Jan. 7 and will start at 5:30 p.m.

PRC’s next game will be against Hattiesburg on Jan. 10 and will start at 5:30 as well.