Board of Aldermen looking for new fire chief 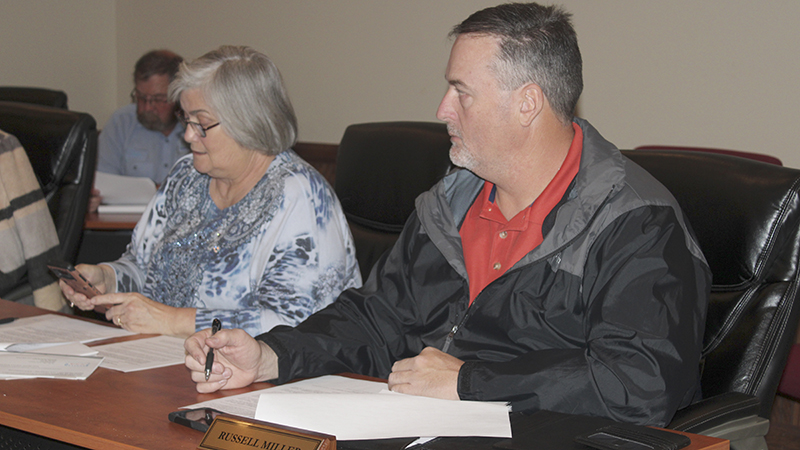 REPLACEMENT NEEDED: Board members Shirley Wiltshire and Russell Miller review paperwork at the Poplarville Board of Aldermen meeting Tuesday. The Board scheduled a special meeting to interview applicants for the Poplarville Fire Department Fire Chief. Photo by Cathy Cook

The Poplarville Fire Department retired surplus items from its inventory list at Poplarville’s Board of Aldermen meeting Tuesday.

Interim Fire Chief Donald D’Antonio asked the Board to declare worn 50-foot hoses in two different diameter sizes as surplus, along with a damaged radio, a damaged flashlight, worn out couches and used thermal batteries. The hoses have holes and if used would be a liability, said D’Antonio.

The Board also set a date to interview applicants for the position of fire chief on Dec. 10 at 5:30 p.m.

In a separate matter, the Board discussed appointing a new member to the Poplarville School Board. The Board is currently considering one person, but Board members Anne Smith and Shirley Wiltshire have other individuals they want to nominate. The Board will discuss the appointment and try to appoint someone at the next regular meeting on Dec. 17 at 5 p.m.

In a separate matter, the Board approved updating signature authority for two city bank accounts, the fire department auxiliary fund account and the bond issue street repairs account, both at Hancock Whitney Bank. The accounts are old and as such required an update to the signature authority, said City Clerk Jane O’Neal.

The Board also created an account for the police auxiliary fund at Hancock Whitney Bank. Previously the fund was at BankPlus, but that account has been closed and the $4,575 balance will be deposited in the new account. That account change also updated the primary signature authority.

—Appointed Lauren Baker to fill the vacant position on the Poplarville Planning Commission.

—Accepted the resignation of Assistant Superintendent Of Public Works John Hancock, who is retiring and authorized accepting in house applications for the position.

—Accepted the resignation of Deputy Clerk Linda DuPont who is retiring and authorized accepting in-house applications for the position.

—Approved a request from the Poplarville Chamber of Commerce to host Movies on Main at the City Square Park on Dec. 20 at 6 p.m.

—Approved a request from the Poplarville Chamber of Commerce to host a pictures with Santa event at City Square Park on Dec. 13 at 6 p.m.