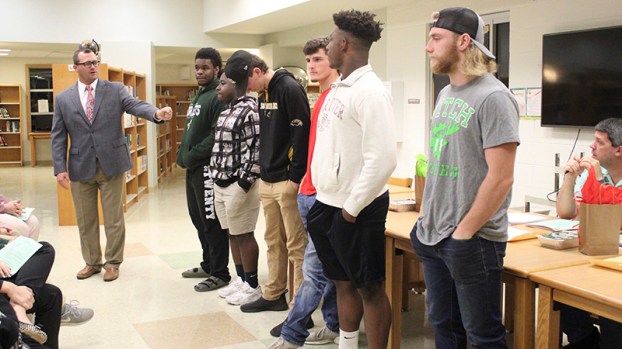 Senior players on the Poplarville High School football team are recognized at the Board meeting Monday. Photo by Cathy Cook.

Athletes and administrators recognized at board meeting

The last Poplarville School Board meeting of the semester celebrated student athletes and outgoing administrators.

Outgoing superintendent Carl Merritt was recognized for his 42 years in education.

“It’s all been a blessing. There’s nothing bad about being with children everyday,” Merritt said.

School Board President Tommy Strahan was also recognized for his nine years on the Board and one year as Board president. According to previous coverage, Strahan is leaving the Board and the Poplarville Board of Aldermen plan to appoint his replacement later this month.

Will recognized the girl’s cross country team for placing ninth at the State Cross Country Championships. Evelyn Kimball was recognized for placing fifth in state out of 148 runners.

The boys cross country team was also recognized for being district champions.

The high school’s football coaches and players were recognized for receiving the South State Championship title. Head Coach Jay Beech said he appreciated the support of the district’s administration and the Poplarville community.

Aside from athletics, high school student Kat Adcox was recognized for serving on the Mississippi Department of Education State Superintendent Advisory Council.

For the past 25 years, Chris Durapau has been cooking and smoking meats as a hobby, but about seven months... read more