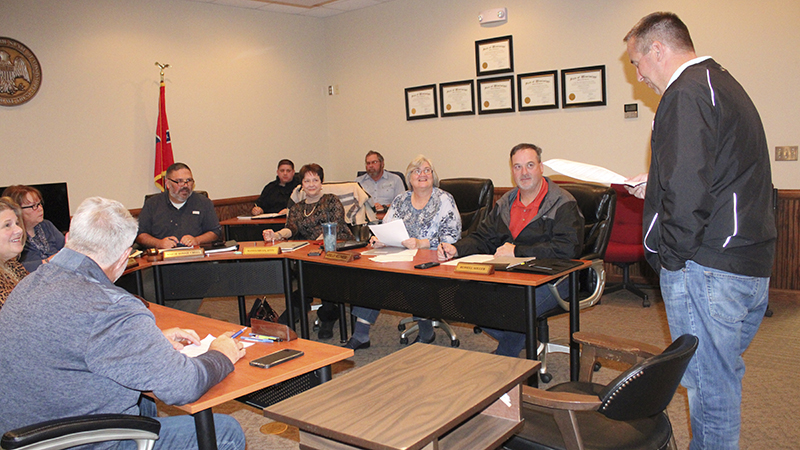 Jason Lamb recommends the Poplarville Board of Aldermen extend a contract for drainage work. The drainage maintenance has been slowed down by unexpected utility conflicts and unsuitable soil. Photo by Cathy Cook.

Golf carts are not allowed in regular traffic on public roads in Poplarville, but some members of the city’s Board of Aldermen are trying to change that.

In a three to two vote, the Poplarville Board of Aldermen approved sending a resolution to the Mississippi State Legislature requesting a local and private legislative bill that would allow golf carts and low speed vehicles on some public roads in Poplarville.

Board members pushed for the change last year, but failed to get enough support to send the resolution to the Legislature, said Board member Tony Smith. The motion at Tuesday’s Board meeting means the request will go to local and private legislative councils.

Board members Kevin Tillman and Shirley Wiltshire voted against the resolution because they think having golf carts on public roads is unsafe.

“Main Street is so narrow and it’s very busy. We have 18-wheelers coming down. I’m just concerned about the safety,” Tillman said.

Tuesday’s vote was just the first step in a process. If the Legislature approves it, then the Board would meet with the community and come up with specific ordinances regulating golf cart use on city streets, said Smith, who voted in favor of the motion. Smith said he thinks at least one more Board member will need to support the idea to convince the Legislature to approve it.

Board members Anne Smith and Tony Smith said they believe allowing golf carts on public roads in the city could be used to create new city events and would make it easier to maneuver around the small town.

In a separate matter, the Board approved a change order to the contract with Hensley R. Lee Contracting to extend the contract time for the drainage work on phase two of the road and bridge bond program. The contract will be extended from 90 to 180 days, giving the contractor 90 extra days to complete the work.

The Board also approved the third payment of $99,039 to Hensley R. Lee Contracting for drainage maintenance work done as part of the 2019 road and bridge bond program.

The Board authorized advertising the asphalt paving work that is part of phase one of the road and bridge bond program. According to previous coverage, the Board advertised for the paving work earlier in the year, but the bids were more costly than anticipated. The Board wanted to prioritize using the bond money for drainage work over paving, so they approved a contract for drainage work and decided to advertise for paving again in winter with the hope that asphalt prices would be lower due to the season.

Mayor Rossie Creel said the county might be open to helping with overlays that do not require milling, and directed Lamb to help him identify streets that only need overlay. In previous instances where the county helped with paving, it provided equipment and labor while the city provided materials, said Creel.

—Authorized letting the city clerk engage a surveyor, if needed, to determine the boundaries of City Square Park. The architecture firm that is designing the pavilion for City Square Park requested a formal boundary survey. The city may already have one in its possession.