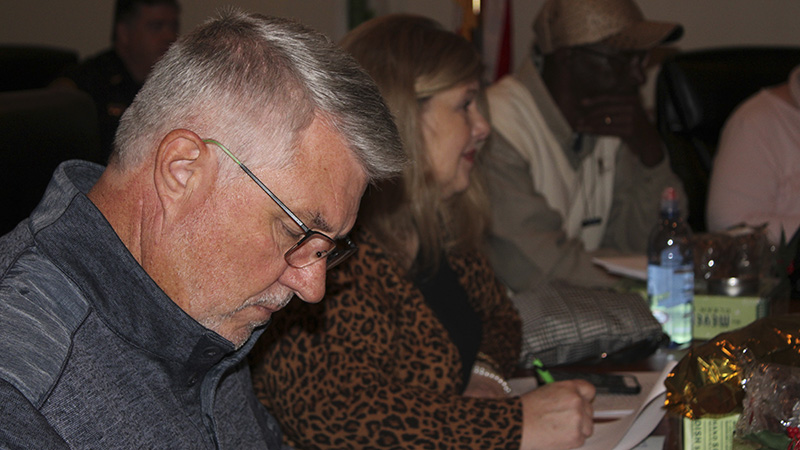 Board members Tony Smith, Anne Smith and Kevin Tillman consider candidates for the Poplarville School Board. The Board of Aldermen appointed Jason Baker Tuesday to fill the empty seat on the School Board. Photo by Cathy Cook.

During Tuesday’s meeting of the Poplarville Board of Aldermen, a new member was appointed to Poplarville Municipal Separate School District Board of Trustees and current water rates were renewed.

Jason Baker was appointed to the School Board of Trustees and will fill the seat vacated by Tommy Strahan, who left the Board after nine years and was acting president, according to previous coverage. Baker was one of two candidates considered. Baker presently owns an insurance company and has two kids in the Poplarville school system, said Alderwoman Shirley Wiltshire. Baker’s wife was recently appointed to the planning commission, Wiltshire noted.

Alderman Tony Smith made the motion to appoint Baker, because unlike the other candidate being considered for the position, he knows Baker and is familiar with his current involvement in the public schools, Smith said.

Alderman Russell Miller, who is married to the District’s Superintendent Konya Miller, and Mayor Rossie Creel, who is the District’s head of transportation, recused themselves from voting in the decision.

In a separate matter, the Board reviewed the city’s water rates and readopted the current rates. The current water rates were originally adopted in Oct. 2015 and last adopted on Dec. 4, 2018, said Public Works Superintendent Sam Hale. The state Department of Health requires the annual rate review, Hale said.

In a separate matter, Code Enforcement Officer Kolby Davis gave the Board an end of the year update. Davis said he has completed approximately 95 initial inspections in 2019. Three of those inspections were on new businesses, one was for the County Courthouse Annex, four were on new houses and the rest were on remodels and updates to existing houses and businesses, Davis said.

—Accepted the resignation of Benton L. Pearson from a laborer position in the Public Works Department and authorized a laborer job posting.