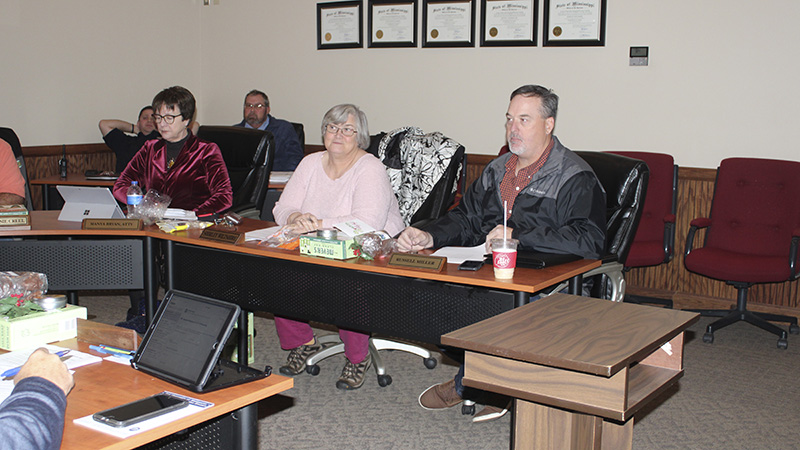 COURT DECISION: From left, Board of Aldermen members Shirley Wiltshire and Russell Miller listen in while the Board discusses appointing a judge to the city’s municipal court. Photo by Cathy Cook

A new municipal court judge was appointed by Poplarville’s Board of Aldermen Tuesday.
During that meeting, the Board approved a motion to appoint attorney Richard Fitzpatrick, effective Jan. 1, to that position after the matter was discussed during executive session. Alderman Kevin Tillman voted against the appointment.
In a separate matter, the Board approved the BBI, Inc. annual hardware and software maintenance agreements for the next year. The agreements have remained the same since 2016, said City Clerk Jane O’Neal, and outline how much the city would pay if BBI representatives needed to travel to maintain the city’s hardware and software. BBI charges $95 per hour for programming and technical assistance onsite, and $50 to $75 per hour for client training.
In a separate matter, Public Works Director Sam Hale updated the Board that the department will try to excavate a culvert on Jordan Street so Centerpoint can lower a natural gas line in preparation for ongoing drainage work in the Road and Bridge bond project. The city will be able to reuse the 30 tons of asphalt from the excavation, Hale said. Sidewalks, curbs and gutters were poured on Martin Luther King Jr. Boulevard Monday for the drainage project, Hale said.
In a separate matter, the Board authorized sending a yet to be determined fire department employee to a fire inspector course in Pearl, Miss for $855.
The request was to send interim Fire Chief Donald D’Antonio, but Board members decided to wait until a new fire chief is hired before determining who to send. At least one person on each of the department’s three shifts should be qualified as a fire inspector, D’Antonio told the Board, but the high cost of the course makes it difficult to accomplish that.
The Board continued interviews for the fire chief position in executive session. The Board held a special meeting on Dec. 10 to interview other applicants for fire chief and municipal court judge candidates, the latter of which was appointed during Tuesday’s meeting. In executive session, the Board also discussed personnel matters in the police department. No motions were made in open session concerning the police department.
In other business the Board:
—After discussing the matter in executive session, approved the promotion of Renee Bridges to accounts payable/payroll clerk, effective March 1, following Linda DuPont’s retirement in February. The Board approved a motion to advertise for a deputy clerk position.