A Christmas Carol for kids 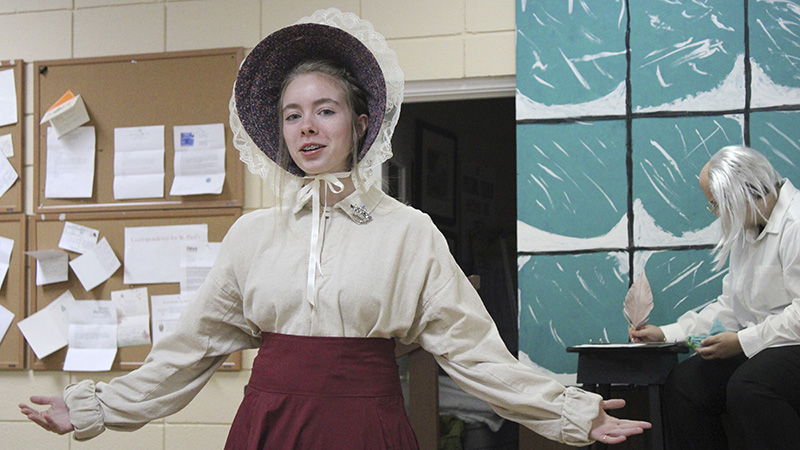 The cast of “A Christmas Carol,” will be putting on a production for kids by kids.

While an adult, retired high school drama teacher Deborah Craig, will be directing the play, the cast and tech crew led in production choices like building props, finding costumes and creating art for the program.

The 30-minute version of the classic Christmas tale will be performed dinner theater style at St. Paul’s Episcopal Church and the target audience is preschool kids, said Craig. A potluck dinner will be available at the show. Cast member Kaitlyn Hughes said people have been surprised that the play can be reduced to 30 minutes.

The cast was familiar with the holiday ghost story before they began work on the play. The story does have movie versions from every decade since 1950, including one starring Mickey Mouse. Jackson Cufr, who plays the ghost of Christmas future, watches the Christmas Carol every year, he said.

Cufr has mastered the ominous silent point that will be familiar to anyone who has watched one of the story’s film versions.

“I was very impressed with her in Picayune On Stage. I’m hoping Kaitlyn will do more theater,” Craig said.

Hughes will be transformed into the elderly Scrooge with face makeup and a balding wig. Playing the mean-spirited Scrooge is fun, Hughes said, and she relates to the character’s sense of exhaustion.

Narrator Brianna Barousse opens the play in a large hat and long skirt. Despite having many of the lines in the performance, Barousse said learning her part has been straightforward. Barousse has also performed before in Picayune On Stage productions.

This will be Emma Cufr first time performing in a play, and like most of the cast, Cufr is double cast: as Bob Cratchit’s wife and young Scrooge’s lost love. Cufr is a homeschool student and has met a few new people through the production.

“We painted sets and tables. There was a lot of teamwork in the making of it,” Cufr said.

Along with painting frosted windows, Cufr designed the program cover—a Victorian house with Scrooge silhouetted in the window.

The Charles Dickens story was chosen because the church hosting the performance is rooted in the Church of England and the congregation wants to celebrate its 90th year, said Craig.

The play will be held Dec. 14 at 6 p.m. Admission is free. Donations are appreciated and will go toward the church’s children’s ministry.