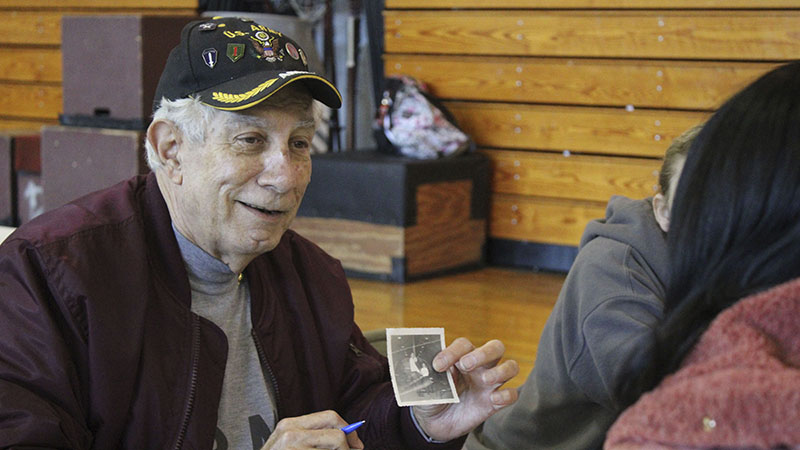 Back again: Bill Roberts, a Pearl River County resident, shares his experiences while serving in the armed forces. He said he has attended the annual Jerry “Chip” Burge Jr. Memorial and Armed Forces Reception for the past several years, at times receiving “Thank You” cards from the students. Photo by Cathy Cook | Picayune Item

Veterans fielded questions from students such as, “have you fired a weapon?” and “why did you leave military service?”

Army veteran Bill Roberts has been returning to the event for 10 years, he said. Roberts still has thank you letters students wrote him after he attended the event in 2009 and 2010 thanking him for his service and commending the bravery he showed by serving in the military.

Warren Ferland explained to a pair of students that the most meaningful part of his military experience was being able to come home when not everyone did. Ferland has shared his stories with students at previous receptions, he said.

“It makes me happy, because I believe in the United States and I believe in my country. I’m proud,” Ferland said.

Marine Corps veteran Kenneth Klimowitz said he drove from Mobile, Ala. to share his experiences with the students, because the honor and respect the students show is not something he sees much anymore. Klimowitz began attending four years ago, and discovered the reception is a great opportunity to meet other veterans.

High school senior Molly Hochin said the reception gives students a chance to see what veterans went through when they served and to understand what they are passionate about.

Student leader Keena Jackson roamed the gym floor, helping to coordinate student helpers Friday morning. She said the event is a great opportunity for students to learn from the veterans; it also allowed veterans to learn about the students. The reception’s organization was led by Robin Jenkins, special populations coordinator at the Picayune School District’s Career Technical Center.

“It’s important so that our students can get first hand accounts from veterans,” Jenkins said. “It’s basically the good, the bad and the ugly that these men and women go through to continue our freedom.”

Veterans bring their memorabilia and letters, which provides students with a living history of the armed services, Jenkins said. Sharing stories with students can also benefit veterans.

The reception included a 34 flag display from Sons of Confederate Veterans, Thibodaux, La. division. Four members of the group attended the event, two of which are veterans, said group member and army veteran Steve Alvarez.

Jenkins said the Sons of Confederate Veterans were included in the event because they keep a history of southern heritage.

“We want to keep the south alive, but some people want it to die,” Jenkins said.

Alvarez said his group was at the event because they preserve history.

Leader of street gang given 30 years