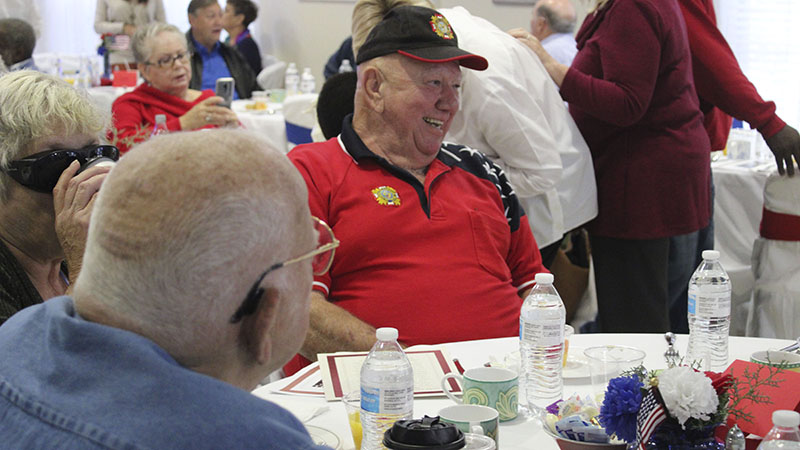 More than one speaker choked up during the Veteran’s Celebration Brunch held Friday at the Senior Center of South Pearl River County. Over 100 people attended the brunch, including veterans, senior center regulars and public officials.

The event included a presentation of colors from Picayune Memorial High School NJROTC members. Due to technical difficulties, organizers were unable to play a recording of the national anthem during the presentation of colors. Instead, attendees faced the flags and sang the anthem together.

The brunch included speakers from every branch of military service.

U.S. Navy veteran Melinda Shaw shared with the attendees that she was inspired to enter military service by her father, veteran Clarence Penton, who instilled a sense of patriotism in Shaw. Penton spent four years as a prisoner of war in the Korean War, Shaw said.

“Anytime we can make a veteran feel special is a special day,” Shaw said.

Retired U.S. Army Sgt. Ronnie Lotz read the U.S. Army creed. Lotz served in Vietnam and said he was pleased with the event.

“It makes you feel good, people going to honor veterans for a change,” Lotz said.

Attendee Susan Madere sang loudly during the national anthem. She said the brunch was overwhelming and nearly brought her to tears.

“It shows the love we have for elderly people here,” Madere said.

State Representative Stacey Wilkes told the audience that many laws discussed in the Mississippi House of Representatives are contentious, but legislators are able to come together in support of legislation that helps veterans.

Mississippi Congressman Steven Palazzo was the key note speaker, and said his number one priority in congress is making sure that service members have the tools, equipment and training they need.

Palazzo said he is proud to work on legislation that affects veterans, like the Blue Water Navy Vietnam Veterans Act. The act is a bi-partisan piece of legislation that passed in 2019 and will give more Vietnam veterans who served offshore the ability to receive disability compensation and benefits for illnesses caused by Agent Orange.

“This is going to provide a benefit stream to them and their families, which is much needed. Much overdue as well,” Palazzo said.

Palazzo also answered questions posed by the Item about healthcare access. Palazzo said he still supports repealing the Affordable Care Act. When asked if that is a realistic goal with the current Congress, Palazzo said the individual mandate has been repealed, so the Affordable Care Act no longer has “teeth.” The individual mandate required people to pay a federal tax penalty for foregoing health insurance. The mandate was no longer in effect as of January 2019.

“I don’t think government should be in the healthcare business period. It should be the private sector offering healthcare,” Palazzo said.

Palazzo said he would like to see the Affordable Care Act replaced by legislation from local and state governments.

Palazzo said he would support funding for mental health services at the federal level, if the money was being put to good use.