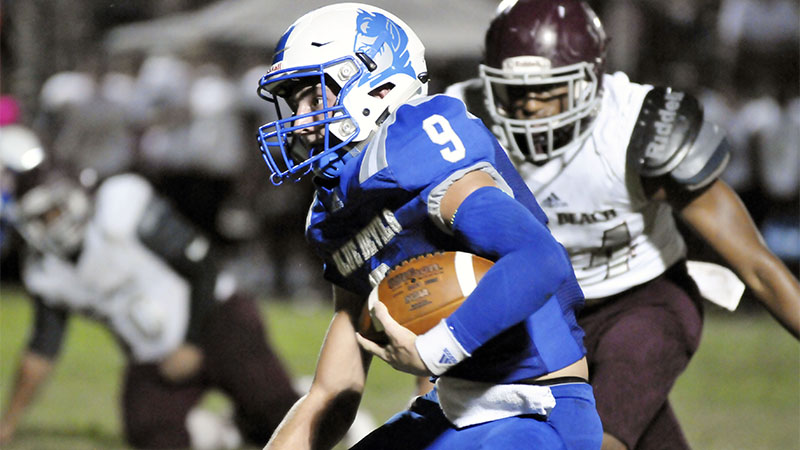 The Pearl River Central Blue Devils were eliminated from playoff contention after the team’s loss to the East Central Hornets.

However, Head Coach Jacob Owen said the final game of the season against the Gautier Gators would be just as hard fought as any other game.

Some coaches may have decided to let some younger players get some snaps in the final game of the season to gain experience.

It would hinder the team’s ability to win, but give future players the opportunity to see some action. Owen on the other hand went into the game wanting a win.

A victory would obviously improve the team’s final record, but could’ve served as a positive shift of momentum heading into the offseason.

“We didn’t come out very focused and made a lot of mistakes early on in the game that we don’t normally make,” Owen said.

The performance of special teams is critical if a team wants to have a chance of winning and Owen said the Gators capitalized on some errors from the Blue Devils’ unit. “Special teams play put us in a bind. It just was a lack of focus, we were down three touchdowns pretty quickly,” Owen said.

The Blue Devils’ senior class has been integral all season for the squad.

Not only have the veteran players performed well on the field, but have also provided good leadership off the field.

Owen said senior tight end Kevin Wilcox had a receiving touchdown and senior running back Ronald Murray had a big game as well.

Those are just a few of the key contributors from the senior class and Owen said he was happy to see those players have success in their final game for the team.

“It was good to see them have a good game for their last one considering the time they put in to get better,” Owen said. The Blue Devils lost several close games during the season and Owen said he was happy with the way his team competed overall. However, Owen said his team needed to turn those close games into wins in order to have stayed in playoff contention.

“Close doesn’t count. We need to have four district wins and even that doesn’t guarantee a playoff spot. We competed in a lot of games, but we need to play to win,” Owen said.

The team will now be moving into the offseason as some athletes break off into other sports they compete in.

Others will take part in the offseason training program Owen and his coaches have constructed to improve the athletes’ strength and conditioning, while the coaches focus on reviewing film footage from this year’s games to nail down areas that need improvement on the field.