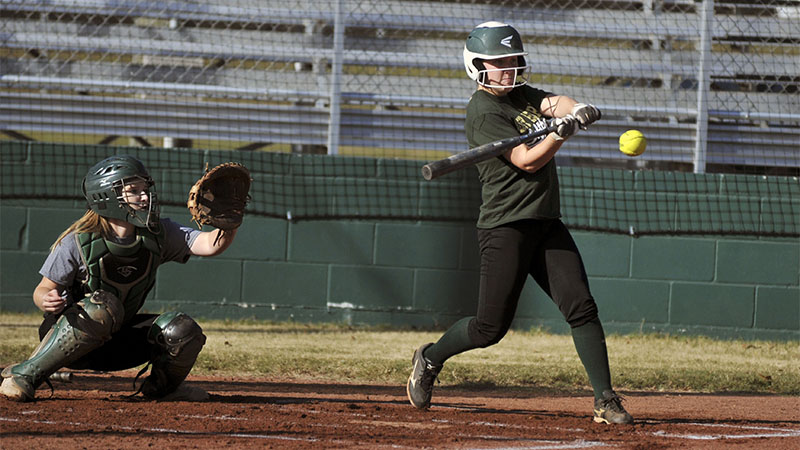 Jonathan Mitchell | Picayune Item At the plate: Senior infielder Harley Blanchard swings at a ball coming down the middle of the plate as senior catcher Lauren Tynes awaits the pitch.

The start of the season is months away, but the athletes on Poplarville’s softball team are already putting in the work to prepare for competitive action.

Winter temperatures didn’t deter the athletes from participating in an intra-squad scrimmage during a recent practice.

Softball is a sport that rewards players with good technique. To keep their edge players have to constantly work on the finer details of the game.

Getting a swing right, building strength and perfecting a pitch are all things that take time and effort.

The Hornets are staying proactive and using the first half of the school year to practice certain techniques and improve on issues from the past season.

Head Coach Jonathan Ray said this period of time serves as not only a way for his athletes to stay ahead of the curve, but also an opportunity for him to scout emerging talent within his program.

“The offseason is spent doing a lot of fundamental work and development. I also use the offseason for evaluation,” Ray said.

There’s some variety in the practices during this period of the year for the softball players.

Some days are spent in the weight room, others in the batting cages and some days the team will go onto the field for some glove and batting work.

The team won’t be lacking in experience this season as it returns the majority of the starters from last year’s team, which finished third in the district.

Five seniors and eight starters in total will give the squad plenty of veteran experience, so Ray is hoping his upperclassmen have an impactful year.

“(I’m) looking for our seniors and juniors to all have big seasons,” Ray said.

Ray said the team’s chemistry is the best he’s seen in years, so the hope is the chemistry will carry over to the diamond when the season starts.

There are a few changes Ray wants to see in his team this year, mainly the ability to rise to the occasion.

The focus on fundamentals and conditioning during the preseason makes the possibility of Ray seeing those positive changes even more likely.

Even with dropping temperatures the players have continued to hone their craft and they’ll continue to do so until official practices start on Jan. 27.

The team will then have about a month before the season starts on Feb. 20 and Ray is hoping by then his team will be ready to improve upon last season’s performances.