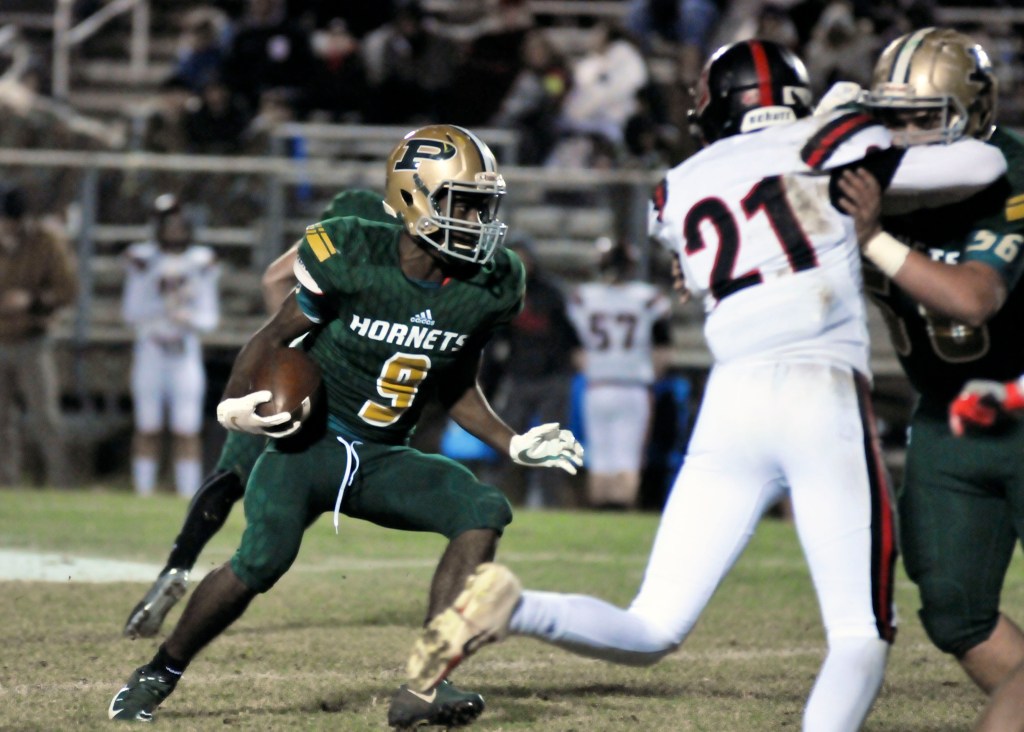 Jonathan Mitchell | Picayune Item Heading inside: Running back Quan Henderson takes a handoff and cuts back inside as guard Tyler Knight blocks a St. Stanislaus defender.

The Poplarville Hornets will advance to the next round of the playoffs with a 35-14 win over the St. Stanislaus Rock-a-chaws.

St. Stanislaus received the opening kickoff and appeared to be on a scoring drive to the end zone when defensive end Devin Hart cut underneath a screen and took the interception back for a touchdown.

The extra point by Zach Carpenter was good and the Hornets were up 7-0 with 4:30 left in the first quarter.

Both teams were trading possessions until early in the second quarter when the Rock-a-chaws were once again deep in Poplarville territory.

Tight end Leon Negrotto took a pass from Max Favre and was running towards the end zone.

But as Negrotto reached the goal line a hard hit by multiple defenders knocked the ball loose and Poplarville recovered the ball for a touchback, putting the ball on their own 20.

However, the Hornets weren’t able to take advantage of the turnover and punted the ball back to St. Stanislaus with over eight minutes to play in the second quarter.

After a couple chunk plays Favre found Negrotto in the end zone from 10-yards out.

The extra point by Gene Hoffman was good and the game was tied 7-7.

Poplarville began the next drive at the 20-yard line and took it for a big drive capped off by a 21-yard touchdown run from running back Chase Shears.

The PAT was good and Poplarville again had the lead 14-7 with five minutes left in the first half.

Both defenses continued to contain the opposing team’s playmakers and the half ended with the Hornets on top 14-7.

Poplarville received the opening kick of the second half.

Ten plays later the Hornets were again in the end zone, this time with a touchdown pass from quarterback Blaise Breerwood to running back Casin Sones from 14 yards out.

Another Carpenter kick sailed through the uprights and the score was 21-7 with 7:28 left to play in the third quarter.

On the Rock-a-chaws’ next drive Favre was again picked off, this time by cornerback Tyron Holston.

The Hornets were again unable to capitalize due to a turnover when Breerwood was picked off on a deep pass over the middle.

St. Stanislaus took possession of the ball and drove down the field.

The 60-yard drive was capped off with another touchdown connection between Favre and Negrotto from 19-yards out.

The extra point was good and the lead was down to seven for Poplarville with 1:12 left to play in the third quarter.

Poplarville needed a big drive and the offense answered with a 12-play drive that took over eight minutes off the clock. Set up inside the St. Stanislaus 5-yard line, full back Zac Owen took a handoff up the middle and into the end zone. With the extra point the score was 28-14 and only 6:27 left in the game.

After a couple of punts St. Stanislaus had the ball on their own 32-yard line when cornerback Trae Wilson intercepted Favre to give possession back to the Hornets.

Poplarville just needed to run the final three minutes off the clock, but St. Stanislaus stacked the box trying to contain the Hornets’ run and forced a quick three and out.

The strategy backfired as Owen again ran up the middle and found an open field ahead of him.

The full back raced into the end zone to seal the game for the Hornets.

After Carpenter’s extra point the score was 35-14 and St. Stanislaus only had 1:32 left to score three touchdowns.

The improbable comeback was made impossible when cornerback Torry Polk intercepted Favre.

The offense came onto the field and Breerwood took a knee to run out the clock.

After the game Head Coach Jay Beech said his team was peaking at the right time and that the squad has potential to go all the way. “There’s no reason we can’t come alive right now and play our best football. We just need to prepare and come out to fight,” Beech said.

The win means the Hornets will advance to the next round of the playoffs.