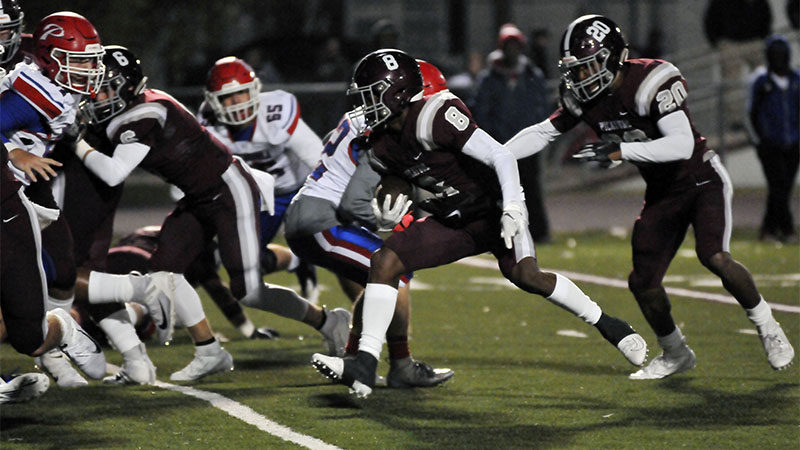 Jonathan Mitchell | Picayune Item Touchdown threat: Running back Cameron Thomas takes a handoff inside after taking advantage of a block from wing back Jalen Hall.

The Maroon Tide football team was putting its win streak on the line when it took on the Wayne County War Eagles last Friday night.

Not only was the team’s undefeated season at stake, but the winner would also claim the district championship as both teams were undefeated in district play heading into the match up.

Picayune has been able to move the ball on the ground against every team they’ve faced this season and last Friday was no exception as the team amassed 550 rushing yards.

Junior quarterback Isaac Hickman got the start because quarterback Jakail Myers was injured.

However, the offense didn’t skip a beat with Hickman under center.

Not only was the offense efficient on the ground, but Hickman was also dangerous through the air as he had a touchdown pass to full back Kade Turnage.

Coach Adam Feeley said Hickman has worked all year to prepare for big situations and that he’s a great utility player for the team.

“He does it all, he loves to play any way he can get out there and he punts for us,” Feeley said.

The defense struggled to contain the War Eagles’ offense in the first half, giving up 28 points.However, some adjustments were made during halftime and the Maroon Tide shut down Wayne County in the second half not allowing any points. Turnage had a sack and an interception from his linebacker position while cornerback Leonard Taylor also had an interception.

The offense on the other hand continued its dominance into the second half as running backs Austin Samples and Cameron Thomas both eclipsed 100 yards rushing.

Thomas has had an incredible season on the ground, rushing for over 2,500 yards on the ground and 36 combined touchdowns. Feeley said Thomas is a natural talent he doesn’t want to pigeon hole, so he lets Thomas read the defense and make the necessary moves for positive yardage.

“You really don’t have to coach Cam a lot when it comes to his vision. I’ll tell him where to hit the hole, but he’ll see what he’s going to see,” Feeley said.

The team’s victory put its overall record at 11-0 on the season while going 7-0 in district play.

It also solidified Picayune as a number one seed heading into the playoffs. Winning over Wayne County sets up a first round match up against Brookhaven. The game will be at home for the Maroon Tide and will take place on Nov. 15.