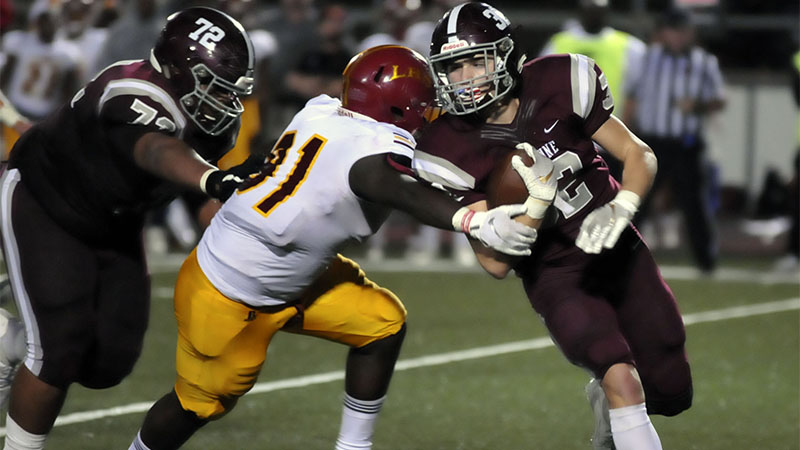 A back and forth game between the Picayune Maroon Tide and Laurel Golden Tornadoes ended with Picayune emerging victorious 42-28.

Laurel received the opening kickoff, but was forced to punt giving Picayune possession of the ball on their own 4-yard line.

Ten plays and 96 yards later, the Maroon Tide scored with running back Cameron Thomas taking the ball from 9-yards out.

Austin Samples’ PAT was good and with 4:53 left in the first quarter Picayune was up 7-0.

On the ensuing kickoff from Kade Turnage, Laurel’s players couldn’t get on the ball in time after touching it and Chad Dudenhefer recovered the loose ball to give Picayune possession on the Laurel 31-yard line.

It only took a minute and half before Picayune was again in the end zone, this time with Turnage taking a hand off from his full back position and running in from 18-yards out.

Picayune had full control and a 14-0 lead with 3:18 left in the first quarter.

However, Laurel wasn’t going down easily and would quickly answer with a touchdown pass from quarterback Dexter Scott to wide receiver Kanarius Johnson.

William Mora came on for the point after attempt and kicked it through the uprights to bring Laurel within one touchdown.

Picayune’s offense was forced to punt back to Laurel, but would quickly get the ball back thanks to an interception from outside linebacker Jalen Hall.

The Maroon Tide had the ball on the Laurel 41 yard line, and would score five plays later on a one-yard touchdown run from running back Austin Samples.

Samples stayed on for the PAT and brought the score to 21-7 for Picayune.

Laurel would strike back quickly once again.

The Golden Tornadoes went 68 yards in seven plays and scored on a throw from quarterback Xavier Evans to Johnson from 24-yards out.

The extra point by Mora brought Laurel once again down by just seven points with six minutes left in the second quarter.

Picayune would go three and out, giving the ball back to Laurel on their own 26-yard line.

The Golden Tornadoes drove down the field, helped by a facemask call against Picayune, and scored on a 14-yard run from Evans.

The score remained that way after an interception in the end zone by Laurel kept the Maroon Tide from scoring before halftime.

Picayune started the second half with the ball, but a fumble from running back Dante Dowdell gave Laurel possession on their own 12-yard line.

After a 90-yard run from Evans, Picayune’s defense stood firm thanks to tackle for loss from Dudenhefer at his linebacker position on fourth and goal giving Picayune back the ball.

However, another fumble, this time by Samples, gave the Golden Tornadoes the ball inside the red zone.

Evans capitalized on Picayune’s mistake and took the ball in from four yards out to give Laurel its first lead of the game 28-21.

Picayune answered with two touchdown drives back to back with Thomas finding the end zone both times to turn the game around and give the Maroon Tide a 35-28 lead with 8:35 left in the game.

Thomas took the ball in again with 1:31 left in the game to give Picayune a commanding 42-28 lead.

Any hopes of a comeback from Laurel were crushed when Samples intercepted Scott to seal the victory for the Maroon Tide.

Head Coach Dodd Lee said after the game that his players would need to start preparing for their next game against West Jones as soon as possible and be ready for another battle against the Mustangs.

“We’re going up there to fight and give great effort,” Lee said.

The game against the Mustangs will take place Nov. 29 with kickoff set for 7 p.m.