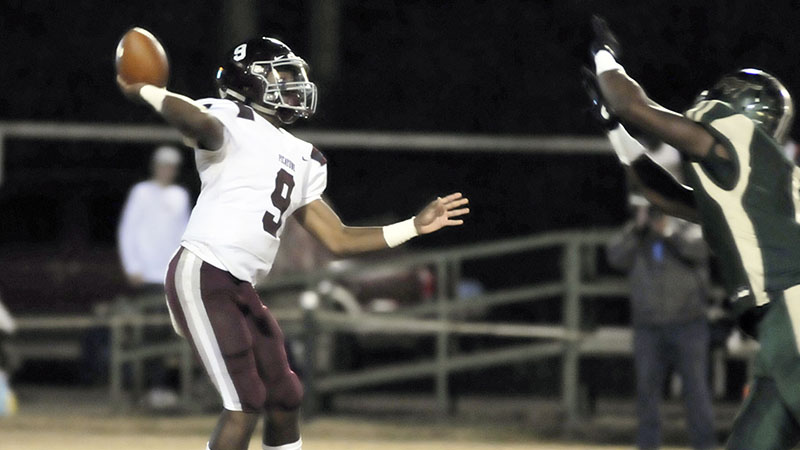 JUST IN TIME: Quarterback Jakail Myers backpedals as he tries to throw the ball before getting sacked. Photo by Jonathan Mitchell

The Picayune Maroon Tide is moving on to the state championship game after beating the West Jones Mustangs 49-14 Friday to become the 5A South State Champions.

It didn’t take long for Picayune’s potent rushing attack to find success with quarterback Isaac Hickman diving into the end zone on a quarterback sneak with just over eight minutes left in the first quarter.

The Mustangs responded with a touchdown drive of their own capped off with a four yard touchdown run from running back Kentrell Pruitt.

Benjamin Cooper came on the field for the point after attempt and sent it through the uprights to tie the game 7-7.

Picayune scored again late in the first quarter on a 24-yard run from running back Cameron Thomas.

Samples’ PAT was again good and Picayune had a 14-7 lead.

After an interception by Picayune safety Jalen Hall, the Maroon Tide started their drive on the West Jones’ 30 yard line and scored again on a run up the middle from quarterback Jakail Myers.

The point after sailed through the uprights, giving Picayune a commanding 21-7 lead.

West Jones and Picayune traded possessions, but neither team could find any rhythm on offense and the two teams went into halftime with the score still 21-7.

Picayune pulled away in the second half.

The Maroon Tide scored on its first drive of the second half with Thomas darting down the sideline to paydirt.

Now up 28-7, Picayune continued dominating West Jones on both sides of the ball.

Cooper’s PAT was good, but that was the last time the Mustangs found the end zone.

Samples recovered a loose ball from his safety position for the Maroon Tide to give Picayune the ball on the Mustangs’ own 18-yard line.

Full back Kade Turnage took the ball into the end zone on the first play of the drive. After Samples’ kick Picayune’s lead was 35-14.

A few drives later Thomas found a seam in the right side of the offensive line and took the ball 87 yards for a Picayune touchdown to extend the lead to 42-14.

West Jones was smothered by Picayune’s defense. With under two minutes left in the game, running back Dante Dowdell scored on a five yard run to seal the victory for Picayune.

The win propelled the Maroon Tide to the 5A state final where they’ll play West Point.

“Our defense came ready to play. We have a lot of work to do, but God is good,” Lee said.

The state final will be held on the University of Southern Mississippi campus in Hattiesburg with kickoff set for 7 p.m.