Hunt still on for director of Economic Development Council 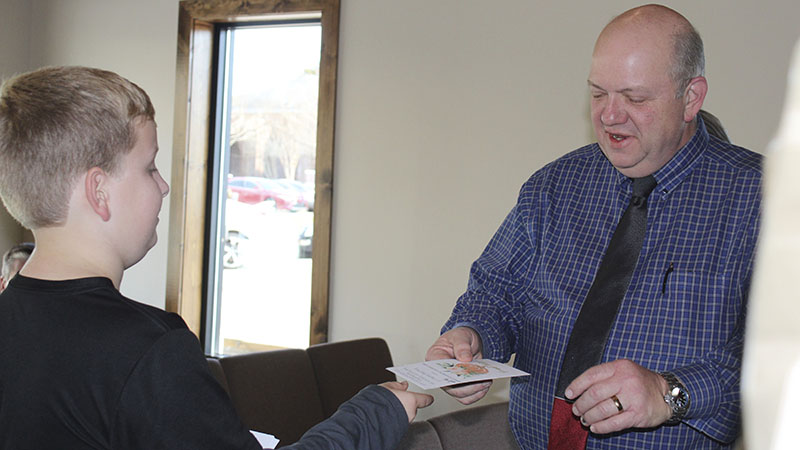 Students from the Torrence Family Schoolhouse delivered invitations to their community Thanksgiving Dinner to the Board of Supervisors at their meeting Monday.

The Board of Supervisors heard an update on the Economic Development Council from Council President Darren Champagne at their meeting Monday.

Champagne said the Council has researched economic development in neighboring counties, which gave them valuable information on what to expect, but now the Council needs direction from the Board on what to do next.

The Council’s Board of Directors offered the position of executive director to an economic developer who decided to turn down the position earlier this year. The Board of Supervisors has committed $150,000 annually to pay the salary of an executive director, said District II Supervisor Malcolm Perry. However, in the search to fill that position, the Council has discovered that salaries for economic developers are typically closer to $200,000 a year, said Champagne, which made it a challenge to find candidates for the position.

District V Supervisor Sandy Kane Smith said the biggest issue with the Economic Development Council is committing to funding and advertising to hire someone for the executive director position. Some of that funding would need to come from outside the Board, said Smith.

The Board discussed holding a forum to educate the public on the need for an economic developer to lead the Council. District I Supervisor Donald Hart pushed for a workshop for the Board and the Council to prepare them for the forum. The Board decided to hold the workshop after their next meeting on Dec. 2 at 1 p.m.

In a separate matter, the Board approved exercising the buyback option on the county’s four small excavators. The road department is able to return the excavators after 36 months and receive new ones by leasing the excavators for approximately $900 a month. Leasing instead of purchasing the excavators reduces the cost, because the county is not responsible for long term maintenance costs, said Road Department Manager Charlie Schielder.

—Acknowledged bond documents from Senate Bill 3065. The county is receiving $350,000 from the state for renovation of the old courthouse, and the Board acknowledged the receipt of $50,000 of those funds, said County Administrator Adrain Lumpkin.