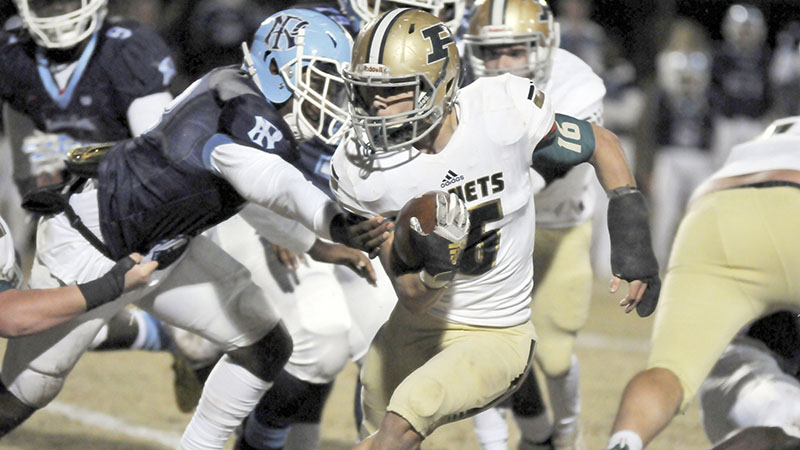 MAKING MOVES: Running back Greg Swann eludes a defender during a run to the outside. Photo by Jonathan Mitchell

The Poplarville Hornets overcame a talented North Pike Jaguars to advance to the next round of the playoffs.

North Pike received the opening kickoff and didn’t waste any time moving down the field.

Quarterback Alijah Martin handed the ball off to running back Damuriyon Montgomery who took it 44 yards for a touchdown.

The extra point by Jace Brown gave the Jaguars a 7-0 lead with 10:49 to go in the first quarter.

Poplarville went three and out on its first possession and after a Trae Wilson punt, North Pike had the ball on their own 41-yard line.

The Jaguars’ passing attack quickly moved the ball down the field and North Pike was in the red zone when Martin’s pass was picked off by Poplarville’s Tyron Holston.

Poplarville’s offense struggled to find any rhythm and the Hornets were again forced to punt the ball.

The two teams traded possessions as both defenses stood firm to end the first quarter.

At the start of the second quarter Poplarville drove the ball 96 yards on a drive that was capped off by a touchdown run from running back Greg Swann.

After an offside call on the extra point against the Jaguars, Head Coach Jay Beech decided to go for two.

Zac Owen bulldozed his way into the end zone and Poplarville led 8-7 with 7:44 left in the second quarter.

The Hornets forced a quick three and out on defense and a poor punt from Jace Brown put Poplarville on North Pike’s 37-yard line.

During the following drive, running back Chase Shears burst through the line of scrimmage from 37 yards out for a touchdown run.

Kicker Zach Carpenter sent the extra point through the uprights and Poplarville was up 15-7 with 6:07 left in the first half.

North Pike responded quickly with a touchdown of their own as Martin found Jacoby Matthews for a 25-yard touchdown pass.

The Jaguars decided to go for two to try and tie up the game, but Poplarville’s defense stuffed the attempt and the Hornets stayed ahead 15-13 with 4:19 left in the half.

North Pike quickly got the ball back on offense and drove down the field with pace.

The up tempo offense paid off as Martin again found Matthews in the end zone, this time from 30 yards out.

The PAT was good and North Pike led 20-15 with 7 seconds remaining in the first half.

Poplarville received the ball to start the second half and found some rhythm on offense.

The 64-yard drive ended with a touchdown as Owen rumbled into the end zone again.

After running back Chase Shears ran in the two-point conversion, Poplarville was leading 23-20 with a lot of football left to play.

However, the Hornets’ defense stood strong and kept North Pike from scoring for the rest of the game.

An incomplete pass from Martin on fourth down at the Poplarville 8-yard line gave the ball back to the Hornets with only 5:46 left in the game.

All the Hornets had to do was run down the clock and the offense did exactly that, sealing the victory for Poplarville.

After the game Beech said he was proud of his players’ tenacity in the win or go home situation.

“In the playoffs all that matters is who comes out with more points. Now we’ll go out and try to get another week (to play),” Beech said.

The Hornets will play South Pike in the next round of the playoffs.