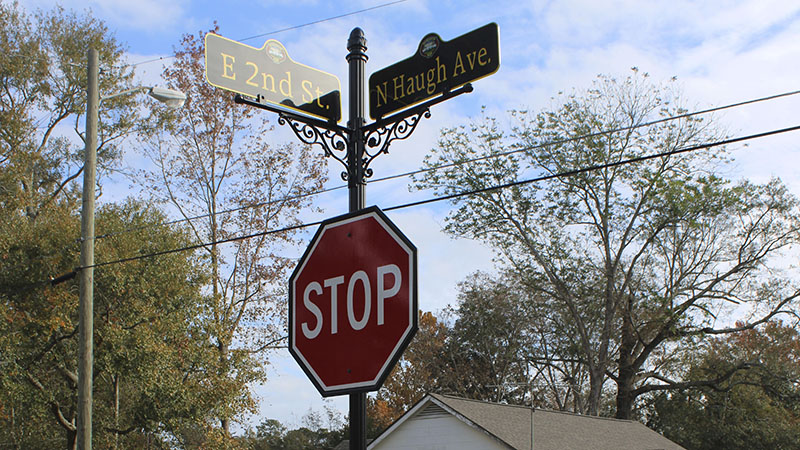 Decorative: A series of new street signs are being installed in the historic areas of Picayune, such as this one at the intersection of East Second Street and Haugh Avenue. Cathy Cook | Picayune Item

A custom black and yellow street sign was installed at the intersection of Haugh Avenue and Second Street Wednesday.

The city of Picayune has purchased and installed five custom sign assemblies per year for at least the last six years in the city’s historic downtown district, said Public Works Director Eric Morris.

The sign assemblies are intended to accentuate the historic downtown district and feature wrought iron ivy supports and an ornate clamshell base, Morris said. Each custom sign assembly costs approximately $900 and is purchased using funds from the public works annual budget, Morris said.

With the installation of two signs earlier this year, the city completed the west side of the historic district and is concentrating on the east side. On the east side, the city has installed two signs on East Canal and the newest sign on Second Street. Haugh and Curran Avenue are the main thoroughfares in the east side of the historic downtown district, Morris said, and the city plans to continue installing five custom street signs a year until all intersections along Haugh and Curran Avenue display the new signs.

“It is heartwarming to think that they’re trying to do something in the historic district,” Wilson said.

Wilson still lives on Haugh in the 1938 home her grandparents built. Some of the homes in the east side of the historic district date back to 1904, the year Picayune was founded, Wilson said.

Both Wilson and Cameron grew up in the area and are descended from the residents who first owned homes in the neighborhood. Wilson remembers her grandparents used to sit on the stoop and share stories. The neighborhood had frequent foot traffic and bicycles, Cameron said.

Many of the homes in the area have historic features like tongue and groove floors, beading on the walls or, like Wilson’s home, are built from cypress.

However, some of the properties are run down or unoccupied, Cameron said, and many of the mom and pop businesses in the area have disappeared.

“We’re glad that the city is trying to work with us on improvements in the historic side of town,” Wilson said.

Cameron and Wilson said they hope to see more improvements and restoration efforts in the neighborhood.