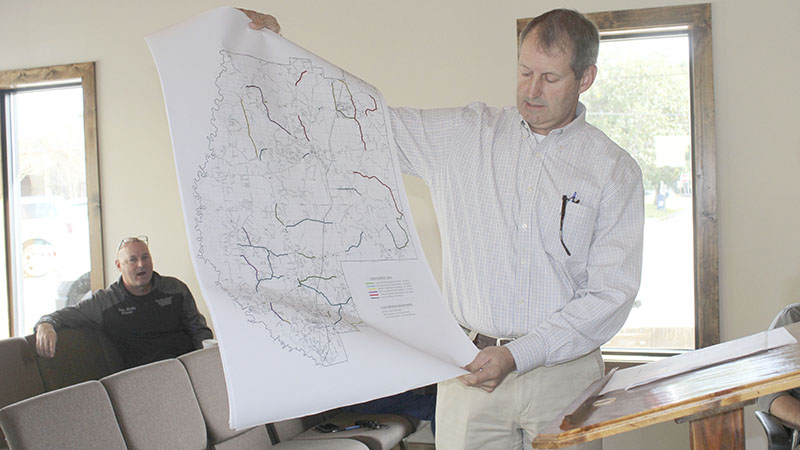 County engineer Les Dungan brought a map of the county’s state aid routes that shows when the last surface project was conducted on each route. The maps will help the Board decide which state aid roads to prioritize for resurfacing projects in the beginning of the year.

Manley and Jameye Martin, administrator of the committee distributing the grant funds, updated the Board of Supervisors on the grant during a meeting held Monday.

The grant can be used to purchase construction materials to repair homes affected by the storm event that occurred in Pearl River County in early May.

There are 16 families that will be able to have safe and secure housing because of the grant, Martin said.

The county was originally told they could expect $250,000 in funds, Manley said, but the grant program was changed to $200,000. However, MEMA has informed Manley they believe $50,000 in left over funds from other counties will be made available to Pearl River County.

In a separate matter, the Anchor Lake subdivision bridge on Lakeside Drive is near completion, said Les Dungan of Dungan Engineering, and should be finished within a few days of work. The last piling on the bridge was driven last week and the top of the bridge is being put down, Dungan said. The school bus will not cross the damn, which is being used as an alternate route, unless it is completely dry, Dungan said, but the emergency access route is holding up well.

—Authorized the execution of an agreement with Jeff Martin Auctioneers Inc. to sell old computer items. The only other option is to dispose of the items as hazardous waste, said County Administrator Adrain Lumpkin. All hard drives have been or will be removed and destroyed before getting rid of old computers, Lumpkin said.