Board enters agreement with architect for City Square Park development 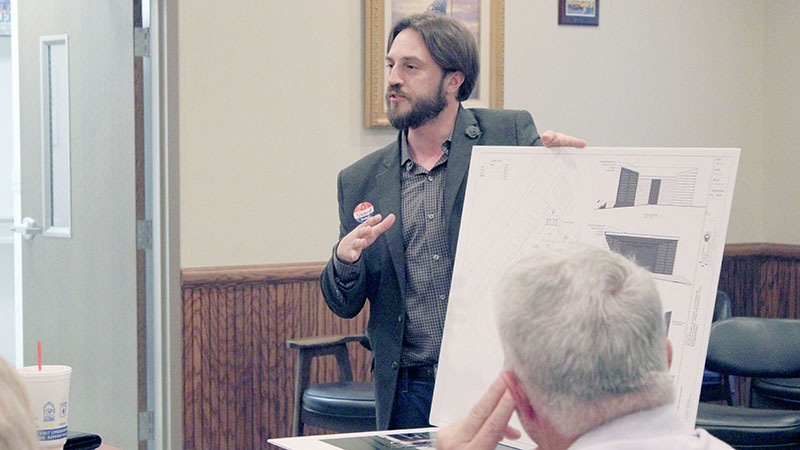 Shane Germany of Landry, Lewis and Germany Architects presents a potential stage design for City Square Park at the Board of Aldermen meeting Tuesday. The city plans to use a $150,000 grant to add a stage and bathrooms to the park. Photo by Cathy Cook.

Poplarville’s Board of Aldermen entered into an agreement with Landry, Lewis, and Germany Architects to design a stage and bathrooms for City Square Park during Tuesday’s meeting.

The Mississippi Development Authority awarded the city a $150,000 grant through its Small Municipalities Limited Population Grant Program to develop the park.

Architect Shane M. Germany presented a potential design to the Board Tuesday. The stage would be approximately the same level as the sidewalk and steps would cascade to the side, Germany said. The Board requested steps that could be used in a performance.

The architecture firm is looking into using steel posts instead of wood and using concrete blocks in the bathroom because the Board expressed concern about termites, Germany said. Board members voiced concerns about potential vandalism and Germany said he can look into vandalism proof products.

Germany said the design will include options for potential future development in the park outside of the scope of the current project, like adding stage lighting, a PA system or security cameras.

In a separate matter, the Board acknowledged receiving a $40,000 façade grant from the Mississippi Power Foundation. The funds are for constructing a handicapped parking area in City Park. Previously, the paving had to be removed from a city paving project because there was not enough funding to complete it, said Mayor Rossie Creel. The city already completed the engineering necessary for the paving work, he said.

In a separate matter, the Board authorized two host agreements with the Senior Community Service Employment Program, which provides funding for two part time senior workers within the city, if senior workers are available, said City Clerk Jane O’Neal. The city has participated in the program in previous years, O’Neal said.

—Accepted the resignation of Katrina Mizell from the Poplarville Planning Commission and took under advisement the need to appoint a new commission member.

—Accepted the resignation of municipal court clerk Christina Dunston effective Nov. 15 and authorized accepting in-house applications for the position. City Clerk Jane O’Neal said she does not believe she will be fortunate enough to find a replacement who could equal Dunston.

—Authorized the execution of a Mississippi Department of Public Safety of Homeland Security grant that was awarded for purchasing portable radios and mobile radios for the fire department.

Council to move to iPads, made Lewis Circle one…