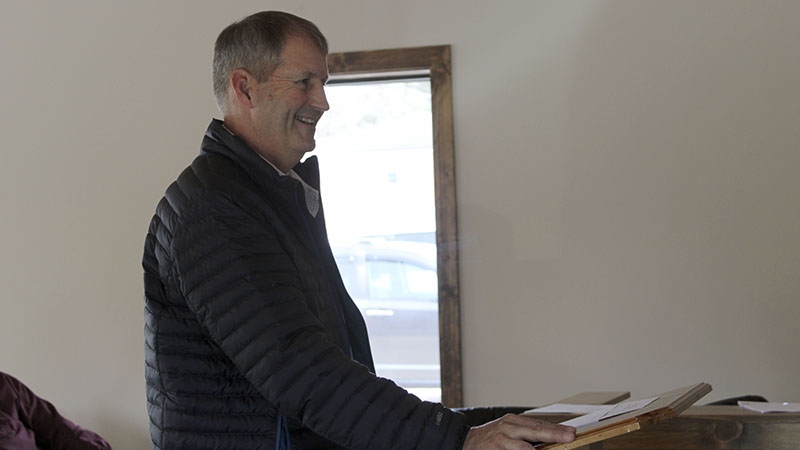 Les Dungan looks for direction from the Board of Supervisors on creating plans to restore the weir on the East Pearl River at the Board meeting Monday. Officials from Mississippi and Louisiana met to discuss the weir last week.

The Board of Supervisors entered an agreement with Dungan Engineering to prepare a plan for a Lower Pearl River maintenance project and a and cost estimate during Monday’s meeting.

The project would secure the structure of the existing weir, repair erosion, and dredge three miles of the East Pearl to make it more conducive for boat traffic. The weir is damaged due to erosion and if it is not repaired and the structure were to fail, the river will bypass the existing structure and all of the water will be diverted over to the Bogue Chitto, said Dungan.

Officials from Mississippi first met in April to discuss the weir on the Pearl River and the need to restore the East Pearl, said Dungan. Last week those officials met again, this time with officials from Louisiana, Dungan said. Everyone at the meeting, which included biologists and environmentalists, was supportive of the maintenance project, Dungan said.

There is possible funding available for maintenance of the weir from the Pearl River Development District dissolution, Dungan said.

There is also a group interested in conducting a broader study of the lower Pearl River Basin. The group is exploring different avenues for funding, including federal funding and possible BP restoration funds. Federal funds could be matched with a portion of the state funds that the Pearl River Basin Development District had on hand at the time of the dissolution, Dungan said.

In a separate matter, the Board set a meeting for 11 a.m. Wednesday Nov. 20 to discuss updating the county’s personnel policy. The policy has not had a comprehensive update in at least 15 years, said County Administrator Adrain Lumpkin, and many federal laws have changed during that time. The meeting is open to the public.

In a separate matter, the Board approved a $102,305 payment to Huey P. Stockstill for the 2019 County Wide Overlay project. This is the fourth payment on the $756,000 contract. The project includes Liberty Road, Cesar Road and Burgetown Road, according to previous coverage. Striping is the only work left in the project, said County Administrator Adrain Lumpkin. The project was discussed in May and the bid was awarded in June, according to previous coverage.

The Board also approved a $96,481 payment of a $759,670 contract to Fred Fayard LLC for work on the bridge on McNeill Steephollow Road. All of the roadwork is complete and the bridge is open to traffic, said Dungan.

—Acknowledged bond documents from Senate Bill 3065. The county was awarded $350,000 from the state for renovations and upgrades to the County Courthouse, said Lumpkin. The building needs electrical and heating upgrades, he said.

—Approved the purchase and installation of filing systems for storage vaults in the County Courthouse Annex for $113,000 from Filing and Storage Systems of Mississippi.

—Approved a request to be a $250 sponsor for the Southeast District Livestock Show, which the county holds every year, Lumpkin said. The event is in Hattiesburg and several kids in Pearl River County compete.

The next regular Board meeting will be Monday, Dec. 2 at 9 a.m.