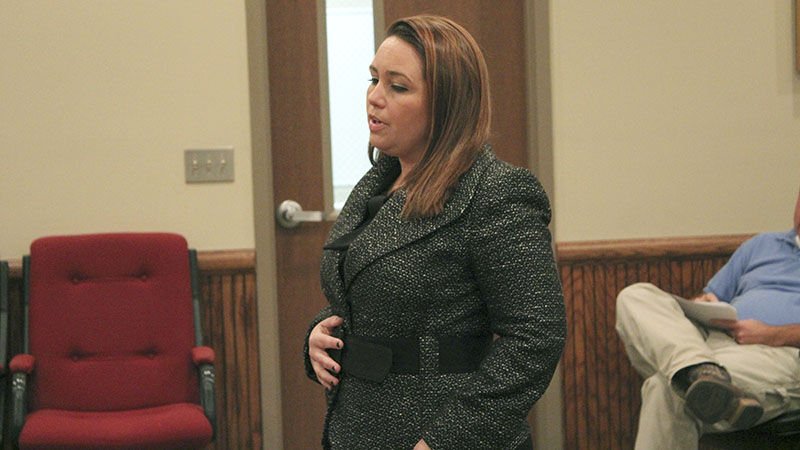 PUBLIC REQUEST: Tara Kellar asks Poplarville’s Board of Aldermen to consider her for the position of municipal court judge during Tuesday’s meeting. Photo by Cathy Cook

The Board of Alderman heard an update on the progress of drainage roadwork on Martin Luther King Jr. Drive as part of the 2019 road and drainage bond program.

Drainage work on Martin Luther King Jr. Drive has been delayed due to an unexpected base issues beneath the road. Underneath the road is organic material.

The drainage work has been ongoing on Martin Luther King Jr. Drive for approximately four weeks, said Jason Lamb with The Walker Associates. The drainage work is being completed by Hensley R. Lee Contracting. Lamb said he believes the road will be passable for construction equipment by the end of the week, but he does not believe it will be open to traffic until after Thanksgiving.

Due to the delays with work on the road and multiple utility conflicts, the contractor is asking for a 90 day extension on its contract, said Lamb. The Board will consider the delay at the first meeting in December. Lamb said the he would recommend the delay for the contractor because they are very responsive.

There is also one right-of-way deed related to the drainage project that still needs to be signed off on, said city attorney Manya Bryan.

Work to repair Jordan Street may also face delays on drainage work, because there is an unexpected gas line running down the middle of the road, Lamb said. So far, the gas line relocations have not cost the city, Lamb said.

In a separate matter, the Board acknowledged the resignation of Thomas Strahan from the Poplarville Special Municipal Separate School District Board of Trustees and took the need to appoint a new Board member under advisement.

In a separate matter, the Board passed a motion to advertise for the open municipal court judge position. Tara Kellar came before the Board during the public comment portion of the meeting to request they consider her for the open position. Kellar said she has roots in the city and previously served as a prosecutor in Poplarville.