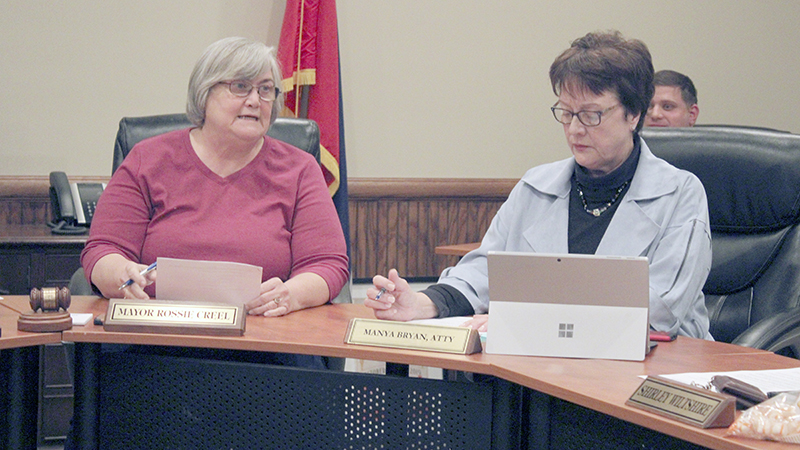 Board member Shirley Wiltshire acts as mayor pro tempore at the beginning of the Board meeting Tuesday. Photo by Cathy Cook.

Poplarville’s Board of Aldermen recently made the decision to no longer list the names of those applying for positions with the city on future agendas.

The names of potential new hires and the request to authorize their hire have typically been listed on the Board’s meeting agendas in the past. Agenda items and the names of applicants concerning the hiring of two officers approved on Tuesday were not listed on the agenda for Tuesday’s meeting.

Names of new hires are included on the official Board minutes after the Board passes a motion to hire someone.

When asked about the absence of the requests to hire the two officers on the agenda, Mayor Rossie Creel said there was not a particular reason for it, the matters just did not get included on the agenda. Creel said that the practice of leaving those matters off of future agendas is “quite likely” to continue to protect job applicants and the Board. When asked for details concerning the consequence the Board is protecting itself from by leaving the names of applicants off the agenda, Creel said the absence of the names of applicants on the meeting agenda was really to protect the privacy of the individuals applying for positions with the city.

There was a request to authorize promoting part time officer Chandler Richardson to a full time officer position listed on the agenda. No action was taken on that request.

Two officer resignations were also accepted at the meeting, one from Sgt. Daniel Collier and another from Officer Chandler Jones. Creel said that Collier resigned after 25 years of service. No explanation was given for Jones’ resignation. According to the Board minutes from Oct. 23, the Board voted to suspend Jones without pay for 120 hours for an undisclosed reason.

The Poplarville Fire Department will try to make sure firefighters on all three shifts are registered on the national EMT registry.

At Tuesday’s meeting, the Poplarville Board of Aldermen authorized letting three firefighters and interim fire chief Donald D’Antonio participate in ride alongs with AAA Ambulance and perform a Forest General Hospital rotation in November or December to complete the EMT class requirements.

In a separate matter, Walter McGinty asked the Board to address cleanup needed on empty properties on Hill Street due to concerns that the overgrown properties led to an attempted break in within the neighborhood. Code Enforcement Officer Kolby Davis said he would look into the matter.

—Approved a motion to advertise bids for the parking area paving project at city park.