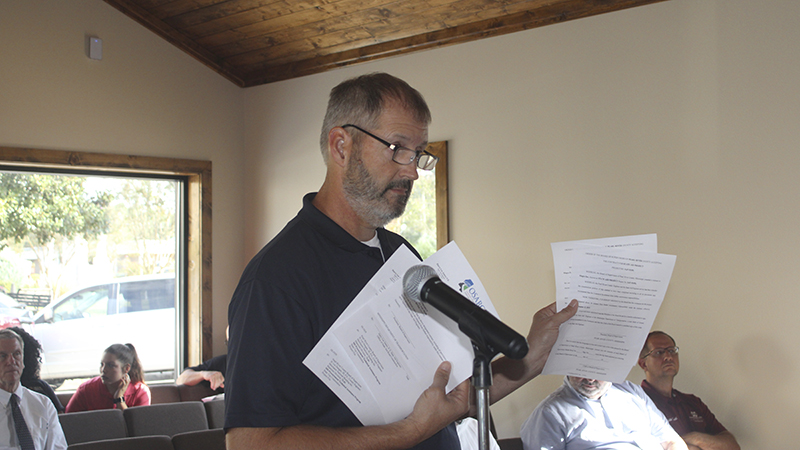 County engineer Les Dungan updates the Board of Supervisors on road work during the Board meeting Monday. Photo by Cathy Cook.

The Board of Supervisors approved the purchase of two vehicles for the Sheriff’s Department during a meeting held Monday.

A Nissan pathfinder for approximately $23,000 and a Dodge truck for approximately $26,000 will be purchased using drug forfeiture funds. Both vehicles will be used by investigators, and the narcotics division will use the truck, said Sheriff David Allison. The Board also approved a request from the Sheriff’s Department to sell three seized vehicles to Martin Auction.

In a separate matter, the Board acknowledged the bi-annual grand jury report from the Circuit Clerk’s Office. In the last six months, the grand jury heard 184 matters in the county, heard testimony from 39 witnesses and returned 135 indictments.

In a separate matter, the Board heard an update about Hillsdale Road, which was damaged when Norfolk Southern had to repair a derailed train car caused during flooding from a large storm in May. County engineer Les Dungan said the county is currently in amicable negotiations with Norfolk Southern concerning how much the company should have to pay for road repairs. The company has asked the county to take a closer look at exactly what damage the company caused and what damage may have predated the train derailment, Dungan said.

The Board entered executive session to discuss ongoing litigation and personnel matters in the road department.

No motions were made after executive session, said Lumpkin.

The next Board meeting will be Wednesday Oct. 23.