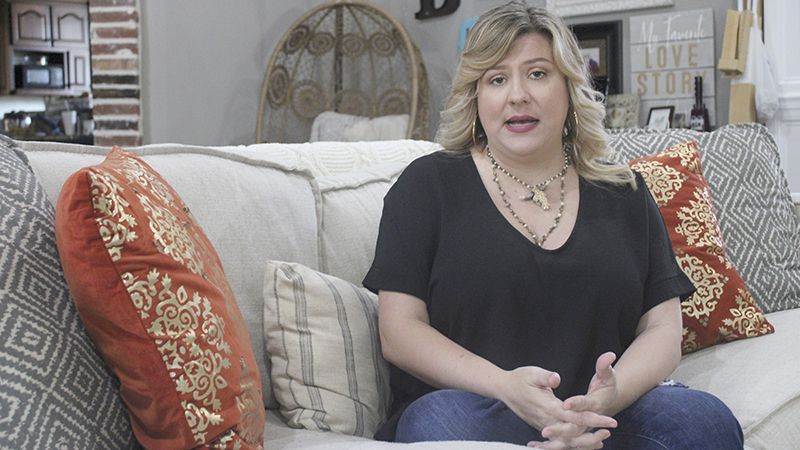 PRC School Board member Christian Burge explains the extreme fatigue that is a symptom of her multiple sclerosis. Even simple activities like putting on makeup or making the bed can leave her exhausted. Photo by Cathy Cook.

Pearl River County School Board of Trustees member Christian Burge will travel to Puebla, Mexico on Sunday to begin a multiple sclerosis treatment that she hopes will stop the progression of her disease.

Burge has suffered from multiple sclerosis since she was a teenager, but she did not receive a diagnosis until a year ago, at age 42. Multiple sclerosis is an autoimmune disease where someone’s immune system attacks their nervous system. The immune system destroys myelin, which is the fatty coating that protects nerve fibers.

“In a nutshell, your body has turned against itself,” Burge said.

In her 20s, Burge visited doctors for flu-like symptoms, and extreme fatigue, but blood tests did not show any problems. As the disease progressed, Burge became heat intolerant, so she cannot stay outside in the heat for long periods of time.

Burge had to quit her work as a photographer because she began to faint during photography shoots with clients.

Two years ago during a visit to New Orleans with one of her daughters, the right side of Burge’s face began to droop while she was driving. Her daughter thought it was a stroke. Tests in the emergency room showed Burge was not having a stroke, but finding an explanation for her ailments took over a year of visiting neurologists.

Finally, Burge met with a multiple sclerosis specialist in Jackson, and was given a diagnosis.

Brain scans showed white lesions on the right frontal lobe of her brain and dark valleys in her brain. The lesions are permanent damage to Burge’s brain, while the dark valleys indicate lost brain matter, which cannot be recovered.

Spending so many years without an explanation for her symptoms made Burge doubt her own experiences, she said.

The fatigue Burge suffers means that even small tasks like putting on makeup, fixing her hair or making her bed, require rest afterwards.

“I stay stuck in the house most of the time,” Burge said.

Burge has to miss out on life experiences she wants to have, like moving her 19-year-old daughter into her dorm room at the University of Mississippi.

The disease can also cause Burge to lose her train of thought or have trouble remembering names. Burge prepares for Board meetings by making thorough notes on meeting agendas.

“Being in those meetings is very difficult for me, because I’ll feel like my brain is full of cotton and I can’t get words out of my mouth,” Burge said.

But Burge is passionate about the District’s schools and determined to continue her work on the Board.

Unfortunately, the first treatment Burge tried failed. Her condition continued to get worse. Burge was offered two new treatment options by her doctor. Both might slow the progress of her disease but both come with significant medical risks.

Burge said being presented with the treatments felt like staring down the barrel of a gun, and being trapped in her house with the prospect of a disease that will continue to progress made her very depressed.

Burge and her husband turned to online research, hoping to find another option. They found a treatment that removes stem cells from the patient, and then uses chemotherapy to wipe out the immune system, in an effort to halt the progression of multiple sclerosis. The patient’s stem cells are ‘cleaned’ then put back into their body in an effort to ‘reboot’ the immune system, Burge said.

The treatment is in clinical trials in the U.S., but Burge does not have severe enough symptoms and has not failed enough other medical treatments to qualify for the trial, she said.

Instead she will travel to a clinic in Puebla, Mexico to receive the treatment. Burge’s doctor tried to steer her away from pursuing the treatment, she said, but after researching it and speaking with other multiple sclerosis patients who had received treatment in Puebla, Burge feels it is the right path for her.

“I feel like I have hope to live again,” she said. “It’s so frustrating that our country is not doing more for autoimmune disease research.”

Burge is well aware that this treatment also comes with significant risks, but for her the risks are worth the possibility of halting the progression of her disease.

“When you are that desperate, you will take great leaps to become healthy again,” Burge said.

She will spend a month in Puebla receiving the treatment, and then will have to remain in a sterile environment for three months after she returns. Burge plans to continue fulfilling her role on the school board via conference calls.

“I feel like I need that part of myself to hold on to during the months of recovery,” she said.

Burge hopes that after she recovers from the treatment she’ll be able to raise more awareness about the need for treatments for autoimmune diseases and funds to support research into new treatments.