PRC swimming on the hunt for a state title 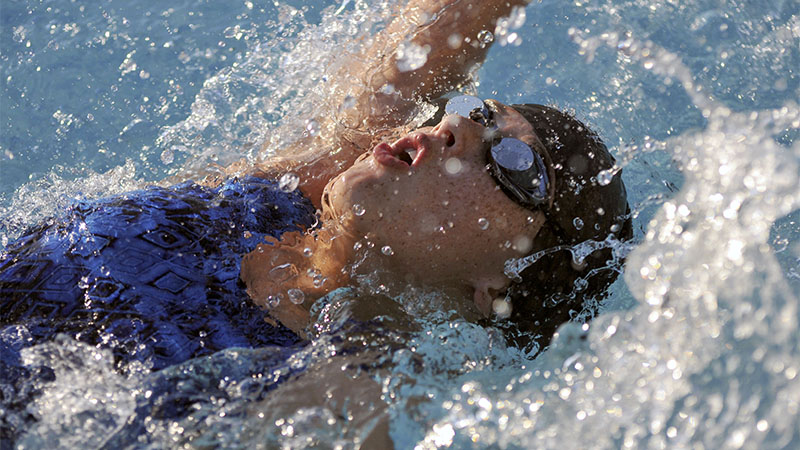 Jonathan Mitchell | Picayune Item State bound: Seventh grader Autumn Craft races the clock during the backstroke event, and will be moving onto state to compete as well.

All year Pearl River Central High School’s swim team aimed for a top three finish in the south state meet, where teams from across southern Mississippi compete for the chance to go to the state meet.

This past weekend the Blue Devils got their chance as they traveled to Laurel to compete in the south state meet against 18 other teams.

The Blue Devils were successful throughout the event by becoming runner-ups in both the men’s and women’s sections of the meet.

Of the 27 athletes Head Coach Blake Rutherford took to the meet, 16 advanced and will be competing in the state meet.

Rutherford said the team’s familiarity with the pool meant the process of getting set up and comfortable within the environment made the meet less stressful for the swimmers.

“We left at the same time, and we were the second team to walk in. We had enough time to set stuff down, have a team meeting and go over expectations. You take those things for granted sometimes,” Rutherford said.

Rutherford also said his assistant coaches Shelly Dill and Beverly Griffing were especially useful in such a big meet.

The practices will shift slightly as the team heads into the state meet with the drills becoming more race specific.

“This week we’ve done a lot of quality sprints. Even with it being cold we’ve been getting them out on the blocks and doing the little things right,” Rutherford said.

Weather has impacted the team because it usually practices at the outdoor pool at the Millbrook Golf & Country Club.

However, due to dropping temperatures, Rutherford has been having his team travel to Slidell so they could practice in an indoor, heated pool.

The practices haven’t been as intense as in the past with Rutherford wanting his athletes to taper off and feel rested for the state meet.

Considering the success the team had at south state with them winning eight out of the eight available south state championships, Rutherford’s goal of competing for a state title is within reach.

The state meet will take place Friday in Tupelo, Miss.