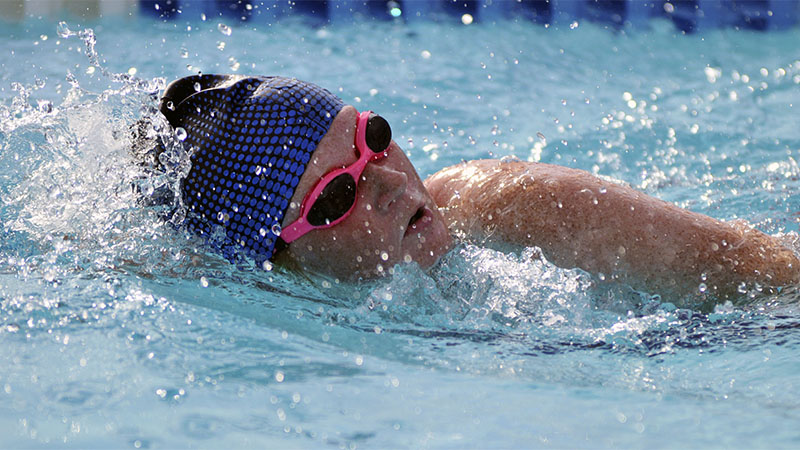 Jonathan Mitchell | Picayune Item Slicing through the water: Senior Kelsey Dill works to keep her breathing steady during a meet.

The Blue Devils swim team traveled to Biloxi for the Biloxi Invitational Saturday to compete in a large meet including 18 teams from schools in class one and class two.

The class one teams were from larger schools, which meant bigger squads, and the ability to earn more points.

PRC is in class two, but that didn’t stop the boys and girls teams from outperforming the majority of their opponents.

The boys team came in third in the meet with 103 points, while the girls team earned sixth place amongst a crowded list of competitors with a score of 62.5.

Head Coach Blake Rutherford said the athletes’ conditioning helped tremendously when going up against the competition.

However, the length of a meet and the amount of events each swimmer has to participate in meant there was some fatigue towards the end.

“We swim thousands of yards, but being in a meet is exhausting. Practice is just going to be about staying loose, and getting a feel for the water, so we can hit it again,” Rutherford said.

The team will have a quick turnaround with their next meet taking place Oct. 1 at Millbrook Golf & Country Club.

It’s not the desired amount of recovery time, but Rutherford said swimming in a familiar pool would relieve some of the pressure for the athletes.

“This meet is at home, and we’re going to be staying loose. That minimizes some stressors,” Rutherford said.

This past weekend the team revisited the location of the season’s first meet where some mistakes made previously, which Rutherford wanted to see fixed.

His team answered the call, and Rutherford said there were no disqualifications in the team’s relays, which had been a problem in the past.

Relays are especially important for teams because they count as double points when being added to a team’s score.

Rutherford wasn’t necessarily focused on the times for this race, and he made sure his swimmers understood that.

Instead, he wanted his athletes to focus on bettering themselves, and learning how to hone in on just racing.

“In the past they were focused on the times. I really felt that was a hindrance instead of getting out there, putting blinders on and just racing,” Rutherford said.

PRC’s squad isn’t perfect in Rutherford’s eyes, and there are still some things he wants his swimmers to improve upon as the season begins to wind down.

Because relays are integral in a team’s ability to earn a lot of points in a single event, the necessity to do well in them is even more important compared to the individual events. An area of work for the athletes, according to Rutherford, is the seamless switch from one swimmer to another during a relay race.

“We need to work on our team relay transitions. I don’t think they’ve grasped that you’re in shape for a meet, even if you have individual events there’s no reason to not go all out in a relay,” Rutherford said.

Rutherford said his middle school swimmers really stepped up, especially Kaelynn Malley and Hayden Gronmeyer. The team has its sights set on winning the south state meet, and Rutherford wants his athletes to believe their goal is achievable. “They’re exceeding my expectations right now, and that’s going to be a focus of mine these last three weeks before we rest up. This is a real possibility,” Rutherford said.