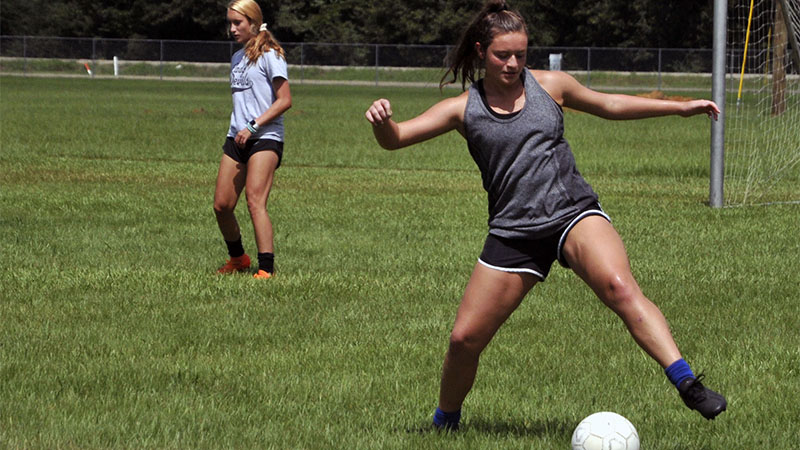 The Blue Devils boys and girls soccer teams traveled to Oak Grove High School in Hattiesburg Saturday to take part in a jamboree.

The preseason competition allowed the squads to identify their respective strengths and weaknesses, while also getting newer players some game experience.

PRC took on Oak Grove and Sumrall during the competition, but since the games were part of a jamboree the results will not be on the team’s official record. During the jamboree, the teams played two 20-minute halves instead of the normal 40-minute halves.

Head Coach Joe Weems said both teams did well, but added there are areas that need improvement for both squads.

For the women’s squad, Weems said there were several projected starters who didn’t make it to the jamboree, but those who were on the field played well.

“We did a good job with our effort, but our positioning wasn’t good. We got out of our shape as the game went on just from fatigue,” Weems said.

Both squads played the same opponents, and Weems said the players on the men’s team struggled with their touch as the opponents increased their press.

“There are players still working on their first touch. It’s just a work in progress, but the guys practice hard and played hard,” Weems said.

There were positives as well to be drawn from the games for Weems.

In soccer, on field communication is key and Weems said his players did a good job of making sure to positively reinforce each other during the games.

“Our attitude seemed to be good. They were working hard and encouraging each other,” Weems said.

These preseason match ups serve as a measuring stick to see how the squads can improve before the regular season begins.

It’s a preview of what’s to come.

“It’s good to have these scrimmage games to see where you’re at. These first games help you refine areas you need to work on,” Weems said.

The teams will have their first true competitive action when they face county rivals Poplarville on Nov. 5.

Weems said there is still a lot of work to be done to get the teams game ready before they take on the Hornets.

For the men’s team the emphasis has been on the players’ first touch.

When under pressure it’s easy to mishandle the ball, and so Weems has been putting his players in game like situations to prepare them for the pressure they’ll face.

The women’s team will be working on positioning for the most part.

Maintaining a steady formation during a game gets harder as fatigue sets in.

To improve this aspect of the game, Weems is making sure his players work on their communication and positioning so an opponent can’t easily put the ball in the net.

Weems said his players are excited for the season to start after practicing for nearly three months.

It’ll be a chance for the athletes to see what they’re made of, and determine if their hard work has paid off.

“Practice has become tedious, they’re ready to get out and play some games. We started practicing in August and by this point they’re burned out on practice and are ready to go out and have fun,” Weems said.

The game against Poplarville will be on the Blue Devils’ home turf, depending on if the football team makes it to the playoffs. The games will take place at 5:30 p.m. and 7 p.m.